What is two meters wide and about the same height? The new Pole Position rig designed specifically to record Ambiences for Atmos. 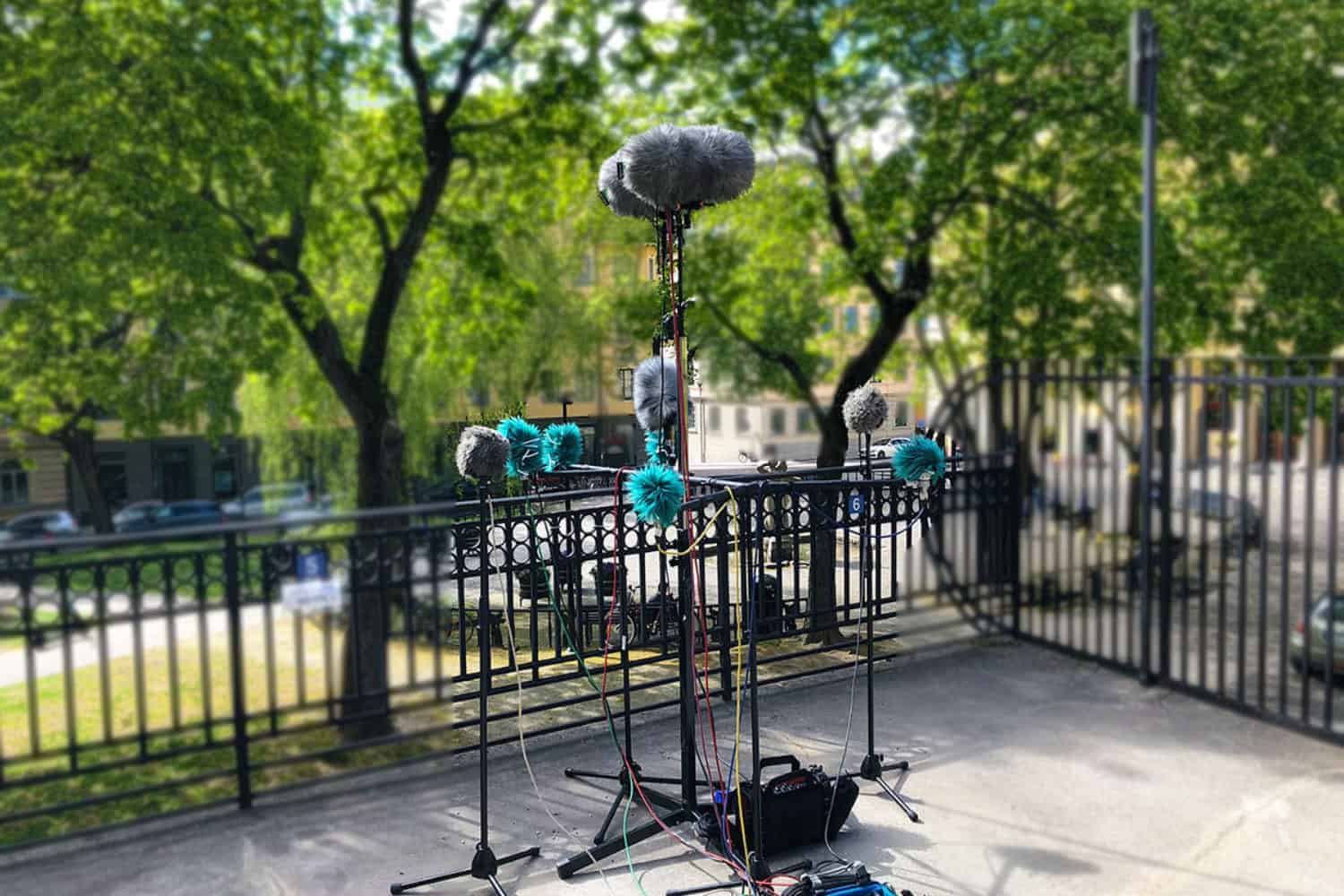 During the last few years Dolby Atmos has become a widely popular sound format, and even Pole have set up an Atmos studio room. The short answer to why? It delivers a fantastic sound experience to the audience, bringing what happens on screen closer than ever before.

A while back Max Lachmann and Bernard Löhr of Pole Position Production, on a visit to meet with sound editors in Hollywood, were told how they miss having ambiences recorded for Atmos in their libraries. Coming home, Pole investigated how to build a rig for the purpose and can shortly present their first library with Ambiences for Atmos in the sound shop.

– Actually, nobody has done this before. The first set of ambiences we recorded was urban environments and we did this on 14 different locations in Stockholm. We recorded squares, busy intersections and so forth. The recordings have incredible resolution and when you mix a film scene from a square with a lot of people and restaurants, you can create an awesome environment, says Bernard Löhr of Pole Position Production.

So, what makes Atmos so fantastic? Well, there are of course several reasons behind this. But one of the coolest features of Atmos is that the format uses height channels which gives sound engineers the possibility to assign certain sounds to locations above the audience thus creating a more immersive sound. In movie theaters equipped with an Atmos speaker system the sound from above comes from speakers in the ceiling. At home, very few people have speakers in the ceiling, or plan to put some there. But there are a growing number of speakers and soundbars that comes with built-in height channels or fit on top of existing models and lets you enjoy Atmos at home.

– We’re in the process of recording several different ambiences. Forest ambience, shopping mall, gymnasium, wind, rain; there is no limit. Listening to an Atmos ambience is a really cool experience, says Bernard Löhr.

To capture the entire soundscape of an ambience Bernard Löhr designed and built a special Atmos rig. It carries eleven different Ehrlund and Sennheiser microphones, placed to match the locations of the speakers in a movie theater. Everything is recorded on the Sonosax R4+, known for having the most quiet preamps, in 192kHz/24bit and then converted to 96kHz/24bits because the Dolby Atmos system does not allow 192kHz. To compare results the crew also used a first order ambisonic microphone Sennheiser AMBEO to record and decoded it for Atmos. But as expected the full setup delivered a far more detailed and rich sound.

– The rig measures a width of two meters and a height of about the same so it’s quite bulky. But the end result is really amazing. The surround sound is much richer than in prior sound formats, says Bernard Löhr.

Another feature of the Atmos format, is the possibility to scale the sound mix. A mix can be completed in a studio with 12 speakers and when you play it back on a smaller system or a tv set, the same mix will adapt to make things still sound as intended. It even scales down to headphones on many mobile devices. 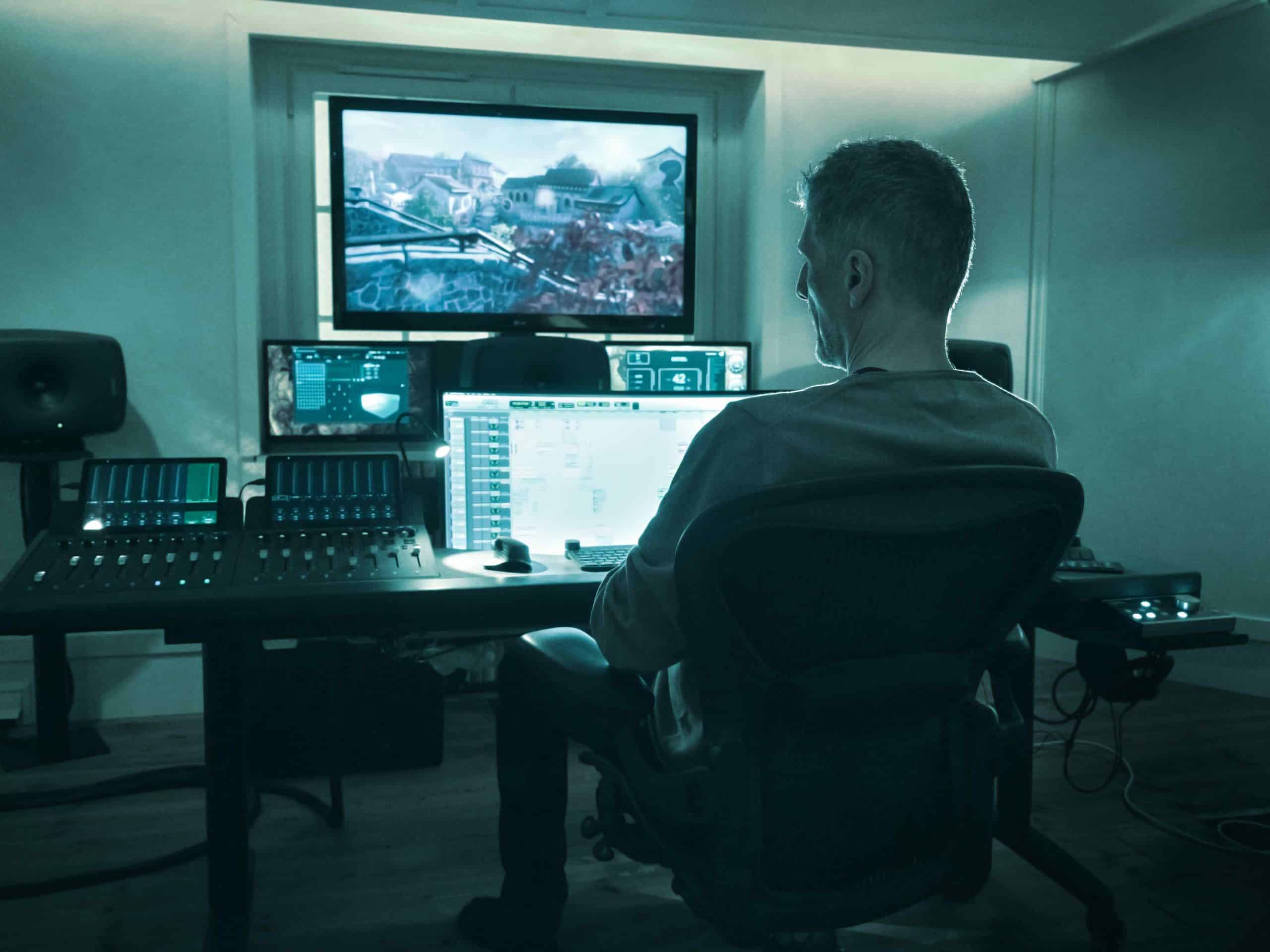 Eric Thorsell at Pole Position Production works out of a nearfield Atmos room intended for television post and games. He too praises the Atmos format.

– The difference is bigger than you would think. Dolby Atmos really surrounds you in a new way, says Eric Thorsell.

Pole Position are among the first few in Sweden to offer Atmos services.

– We can deliver audio post-production as well as interactive sound design in Atmos. The interest in, and demand for, Atmos is growing rapidly and we are looking forward to taking on Atmos projects, says Eric Thorsell.

A teaser of the upcoming library can be downloaded here: http://eepurl.com/bDEjcb

The first full library is due December 2020.

The rig consists of a DPA stand, Rycote wind jammers and the microphones used are: