What does it feel like sitting in an armored vehicle under heavy attack? 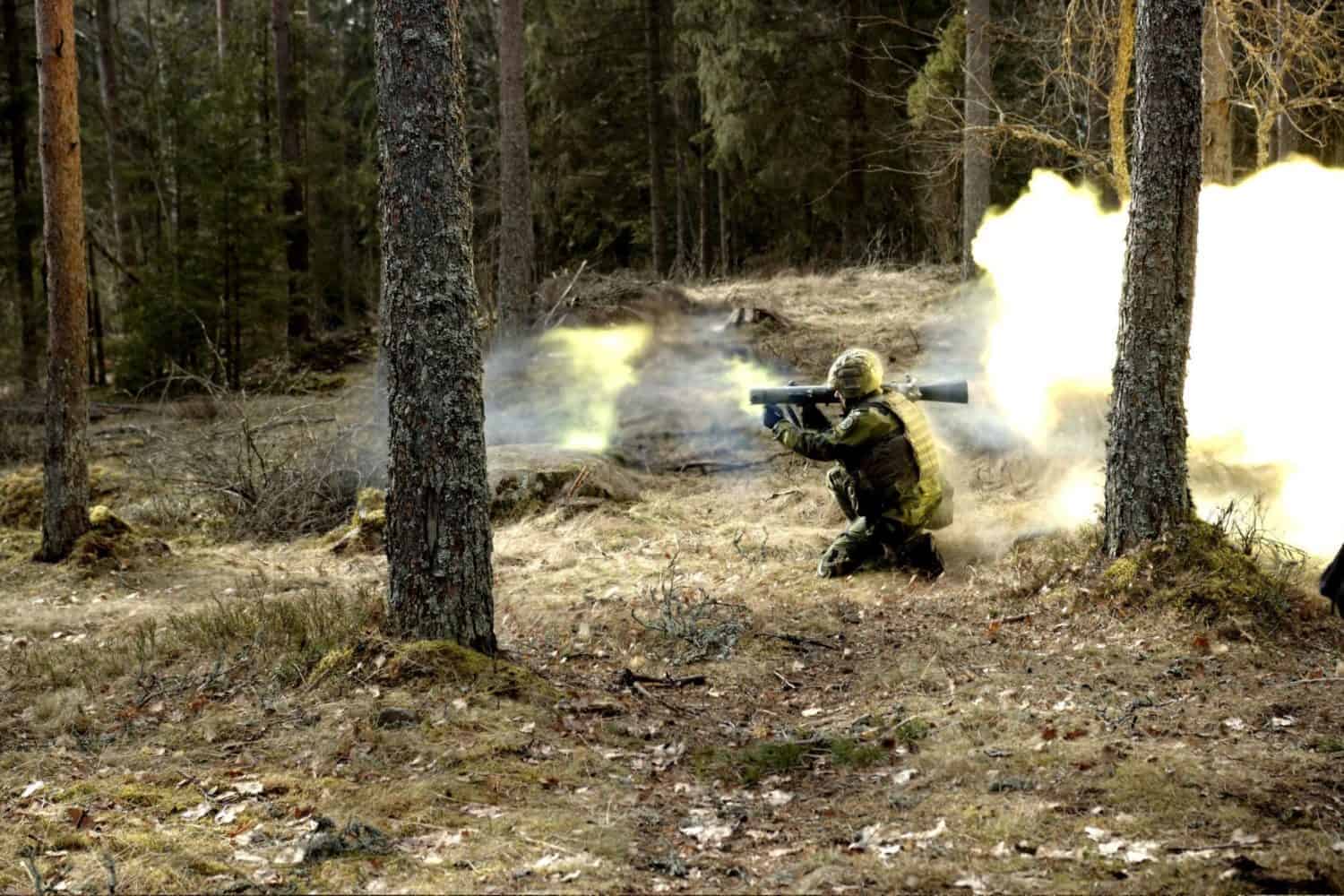 During the making of online action game War Thunder game developer Gaijin Entertainment turned to Pole Position Production with a request for sounds of high-velocity projectiles of different calibers hitting an armored vehicle.

War Thunder contains the largest collection of ground, air and naval war machines on the market – more than 1 700 as of October 2020. All of them are based on real tanks, planes, helicopters or ships and are simulated as realistically and historically accurate as possible. War Thunder also simulates specific features like reactive armor, thermal sights and uses a realistic damage model that carefully calculates what exactly a shell piercing the armor hits.

In addition, there weren’t many libraries available for sale which meant Gaijin had to record everything in great detail, from the engine to the tracks, the turret turns, the aircraft engine at different speeds and from different sides, and everything separately. 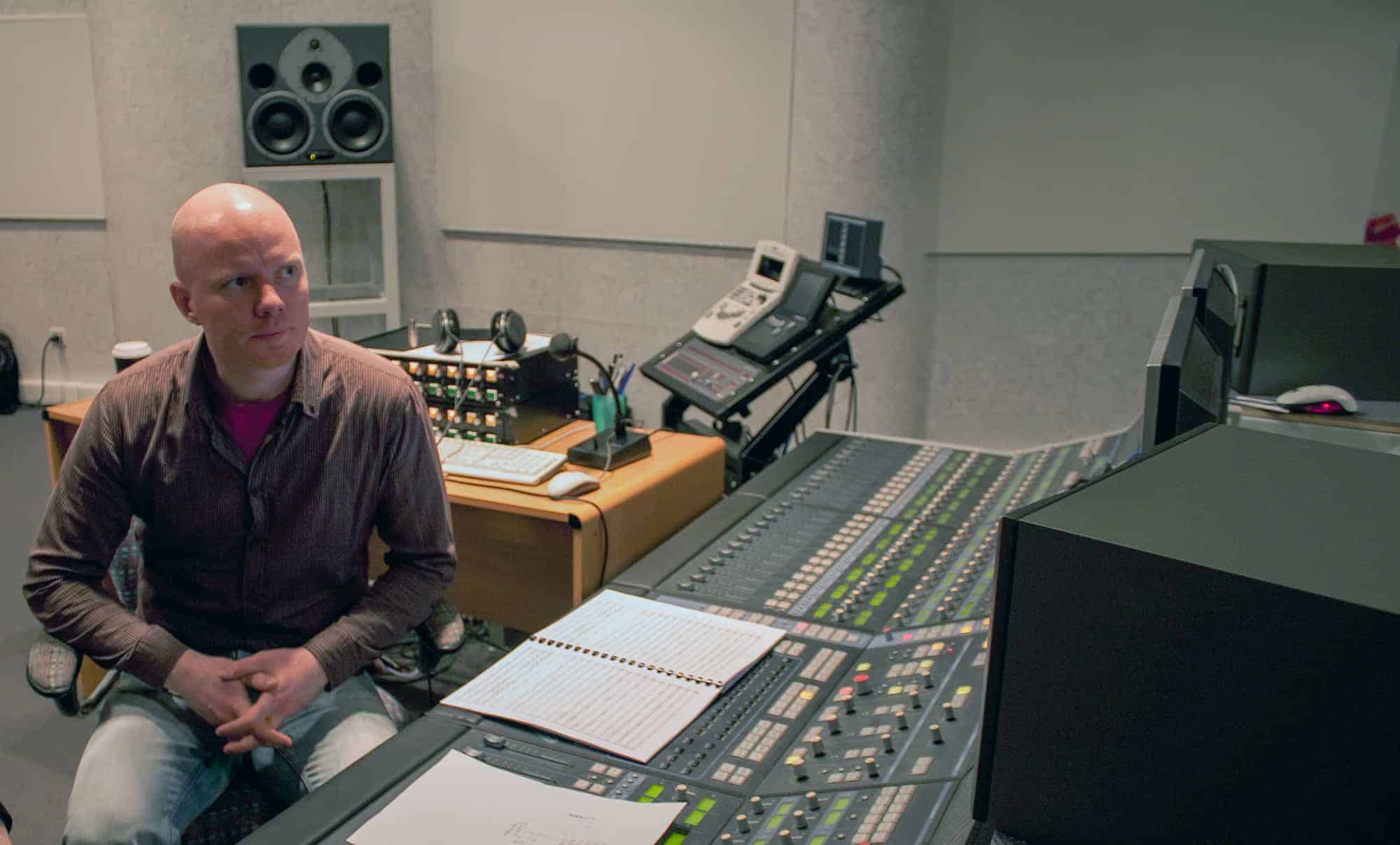 – We needed everything we could find. Any tank, any aircraft from World War 2 and modern days. Besides, as the game was replenished with new sounds of planes and tanks, it became clear that other sounds needed to be improved and changed, for example the sounds of armor impacts, says Pavel.

There is no secret that the required sounds can be obtained by mixing various other sounds; there are many thematic libraries on this topic. But since those sounds already had been recorded, Pavel found them too recognizable even with skillful mixing and processing.

– These sounds are often repeated in War Thunder so I wanted to exclude even the slightest recognition with other libraries. And when it comes to the sounds of armor impacts, literally everything makes it unique: the caliber of the projectile or bullet, the speed, thickness of the armor, the type of microphone, the angle of installation of the microphones relative to the impact, the angle of impact of the projectile or bullet. Therefore, it was decided to organize the recording of such sounds and we turned to Pole Position Production, says Pavel.

So, in early March this year Max Lachmann, Bernard Löhr of Pole Position Production, along with camera man Richard Blom from the Blom Brothers, packed their recording gear and headed south to participate in a military exercise on a proving ground just outside the town of Eksjö.

– Our colleague Linus Anderberg happens to have a friend who works as an explosives expert in the military. Linus inquired if it was possible for us to join a regular exercise and record sounds of high-velocity projectiles of different calibers hitting an armored vehicle, and fortunately it was, says Max Lachmann of Pole. 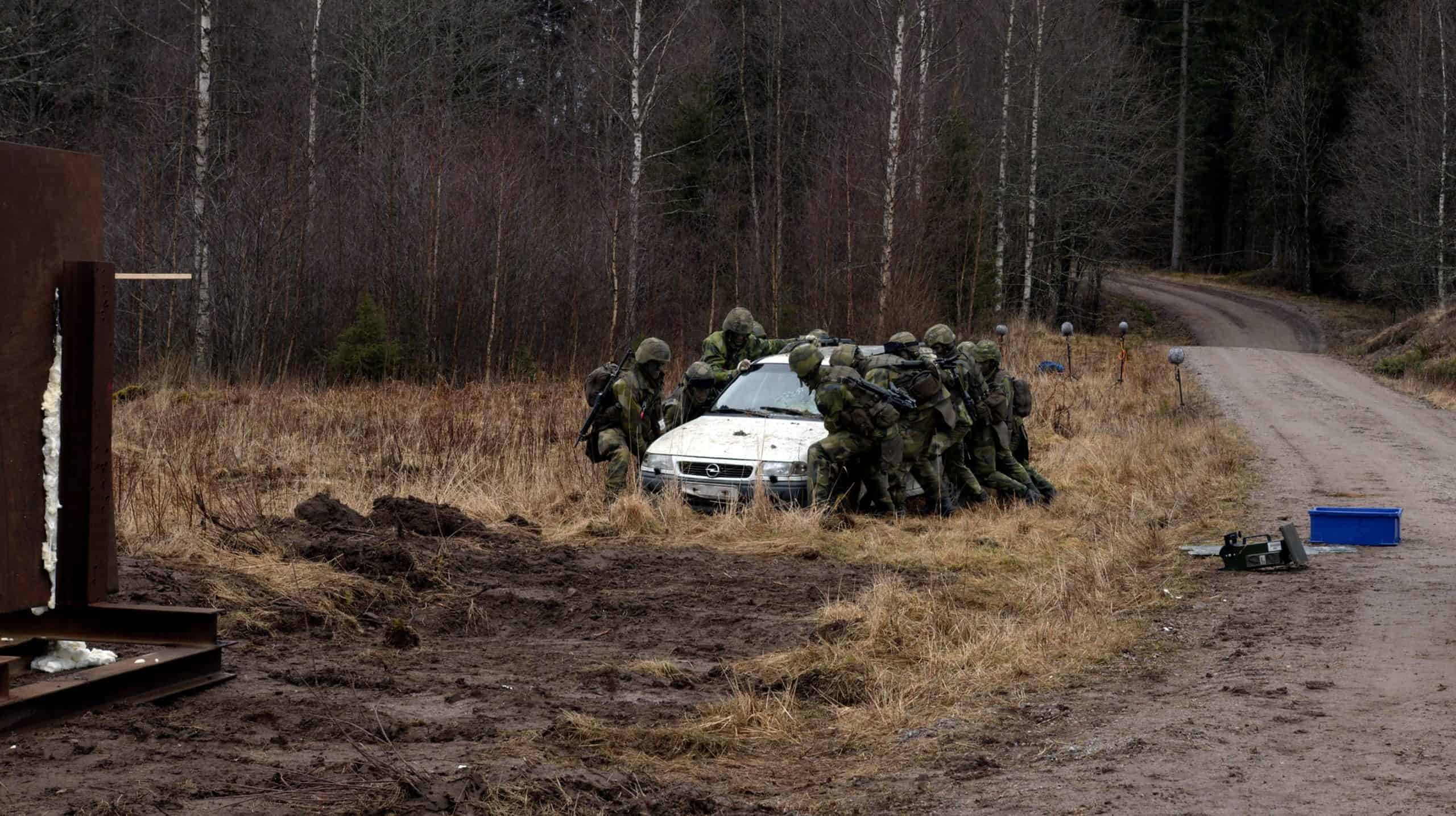 Getting some help with the props.

To simulate what it feels like getting fired upon whilst in an armored vehicle, the plan was to set up microphones in a car parked behind an armored wall.This way they were hoping to capture the feel of impacts on armor in an closed compartment.

– We couldn’t just put the microphones on the wall. We needed the car to get the right resonance structures, says Max.

Problem was, however, that the car wasn’t parked behind the wall and long ago had lost its primary function, to move from A to B. At first a group of soldiers tried to push it into place but couldn’t move it. But then a failed attempt to lift it was followed by a successful haul by an all-terrain vehicle. 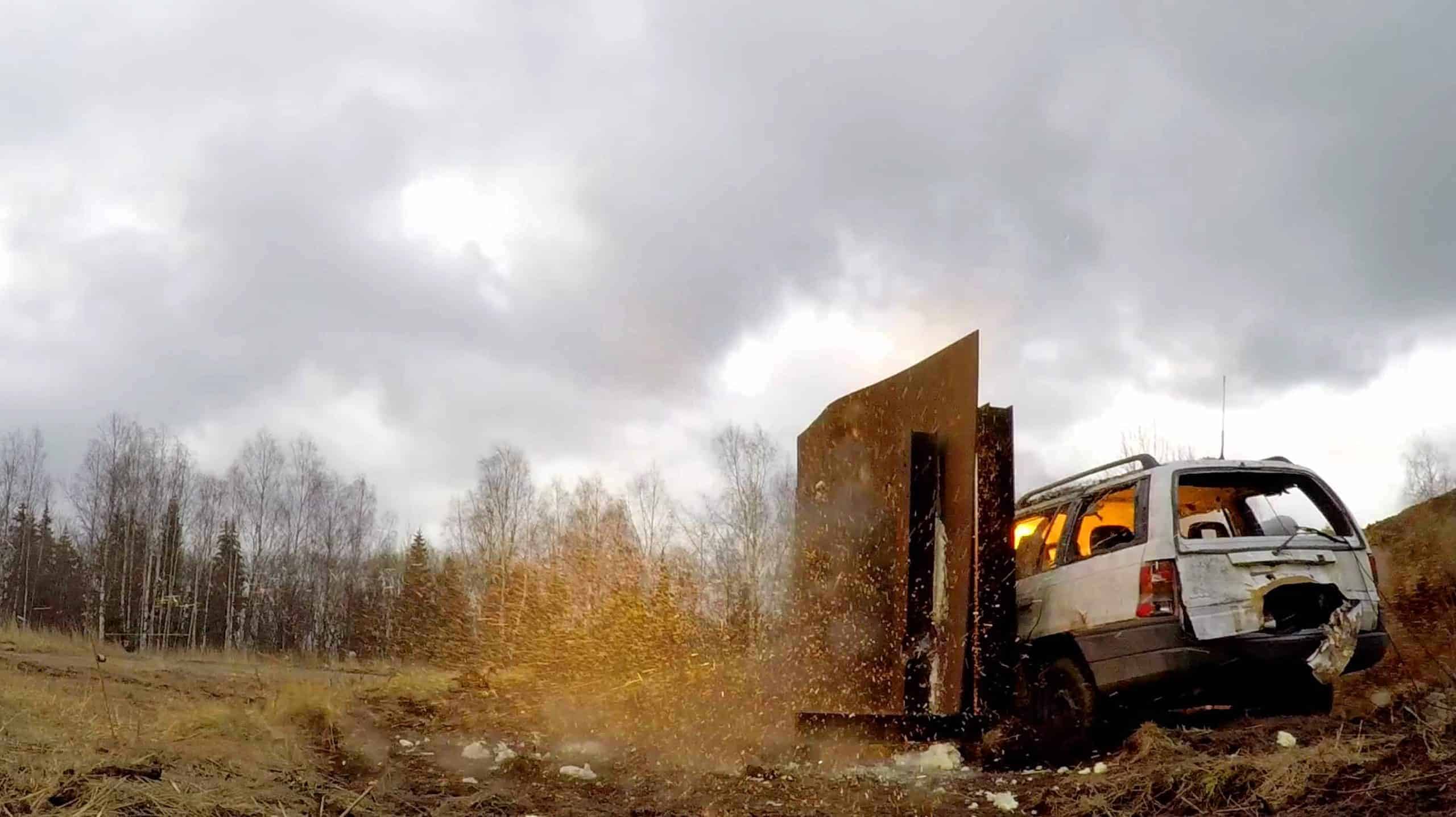 With the car in place, all the microphones mounted, and the Pole crew dressed up in armored plates and safely placed in a pit on top of a hill, the show could start and during a few hours anti-tank mines, RPG:s, assault rifles and pistols were fired against the armored wall, feeding the Pole microphones with constant impacts.

During a normal session the crew continually listen to the recording in order to determine if the recording levels are exactly right, and in case they aren’t, make the necessary adjustments. On a hill a couple of hundred meters from the equipment, this wasn’t possible but from time to time the Max and Bernard would run down to the wall and make sure the levels were optimal. 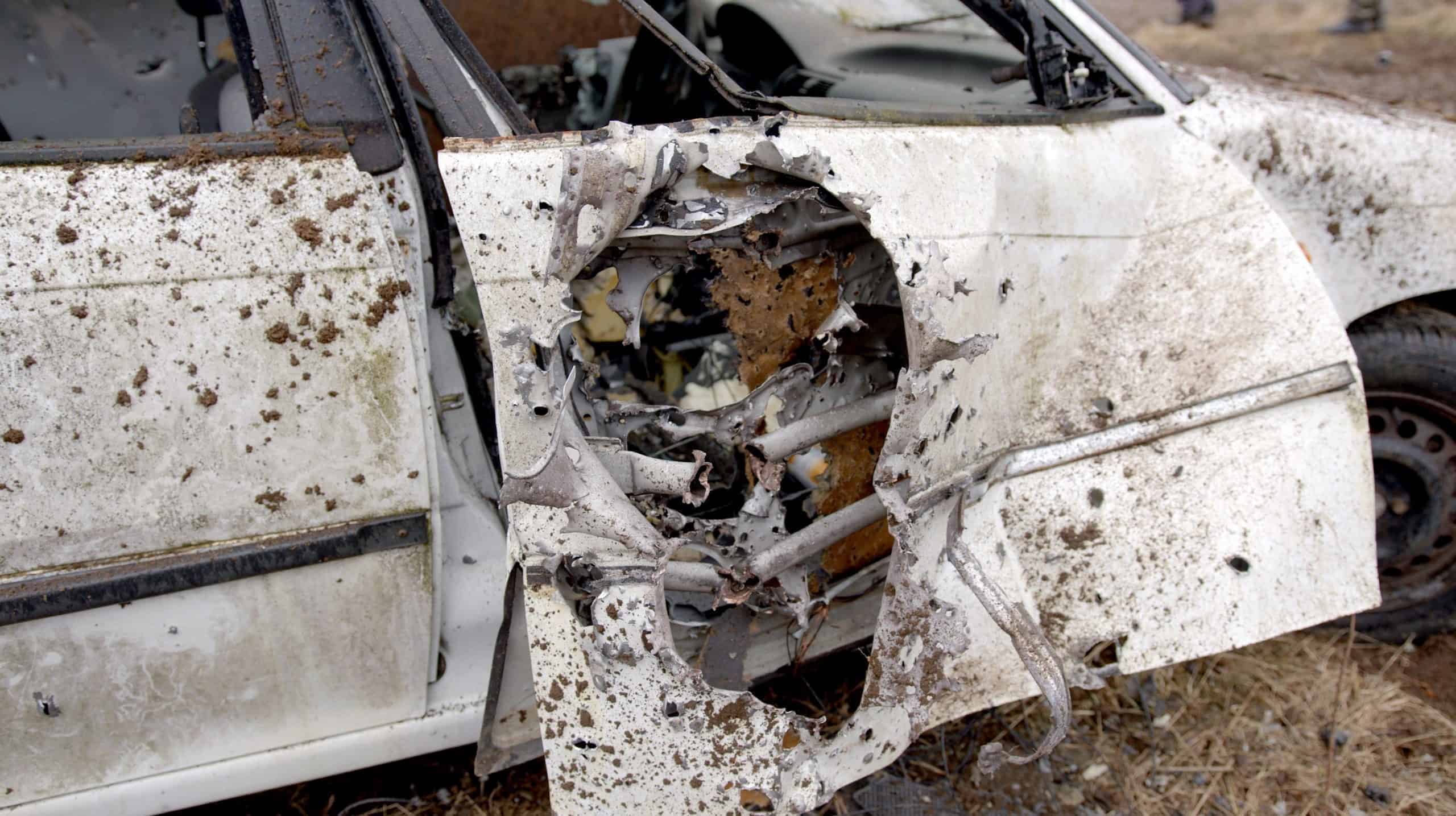 The exit hole of a mine penetrating first armor and then the car.

– We got great sounds from this recording session. We lost a few cables to grenade shards and one of the mics was nearly hit by an RPG projectile which missed the armored wall and went in through the car’s roof, but altogether this was a really good session, says Max.

At Gaijin Entertainment, Pavel was happy with the end result.

– We are very pleased that we managed to do this. These are the small details that are very important and that shape the overall sound of the game. It’s hard to underestimate the impact of sound in a game, says Pavel.

War Thunder is available on all major gaming platforms and is enjoyed by tens of millions of players all over the world.

“Music is what gives the story it’s color, tone and pacing”

“Where there are birds, there will be planes” – join Pole on location!

Getting ready to record – the Pole planning procedure

GDC 2020 cancelled – but why were we going in the first place?

“Most of the startups we meet are diamonds in the rough”

A Field Recording Diary – When Things Don’t Go As Planned…

A Pole Position Chronicle of 2019

An Icon of the Open Highway

This website uses cookies to improve your experience while you navigate through the website. Out of these, the cookies that are categorized as necessary are stored on your browser as they are essential for the working of basic functionalities of the website. We also use third-party cookies that help us analyze and understand how you use this website. These cookies will be stored in your browser only with your consent. You also have the option to opt-out of these cookies. But opting out of some of these cookies may affect your browsing experience.
Necessary Always Enabled

Any cookies that may not be particularly necessary for the website to function and is used specifically to collect user personal data via analytics, ads, other embedded contents are termed as non-necessary cookies. It is mandatory to procure user consent prior to running these cookies on your website.