The Skydiving and Parachute Library 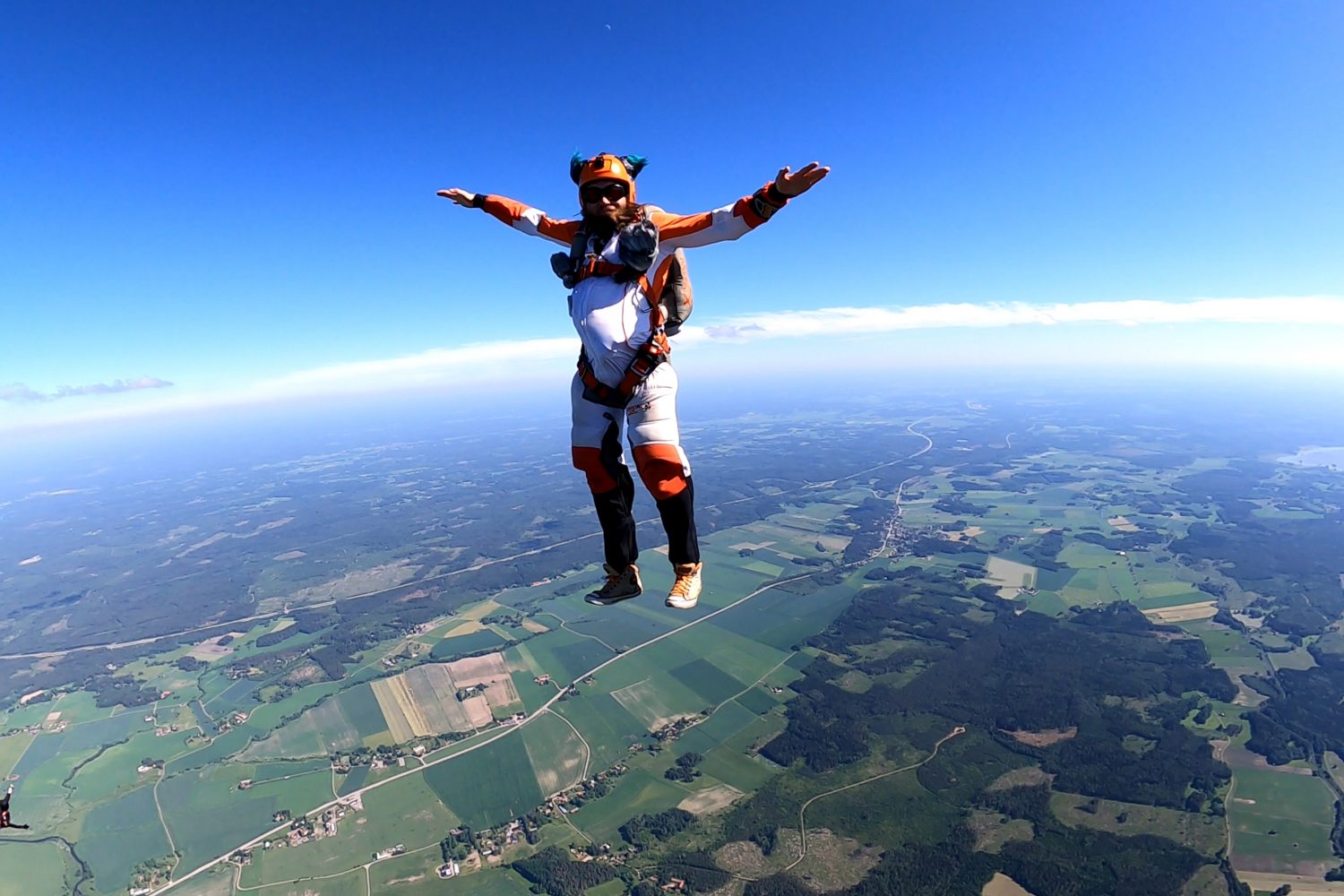 Ever wondered what skydiving sounds like when stepping out of a plane at 13,000 feet? Well, then this is your lucky day. We have just released a shining new library of skydiving and parachute sound effects. AND WE ARE GIVING IT AWAY FOR FREE! Follow the link at the bottom of this blog to grab it.

So, Oskar Rödin, you were the one who raised the hand when Pole wanted to record what skydiving sounds like. Have you been doing this for a long time?

I have been in the sport since 2011, it took me a couple of years to get over some classic thresholds like being more comfortable, owning my own equipment, packing course etc. Also did some early wind tunnel practice that helped me a lot to get faster into the sport. I have over 2,000 jumps and it took off when I started working in 2015 as a tandem cameraman, so, all in all I have been very active during the years.

And this particular day, where did the jump take place?

We did the jump with Stockholm parachute club located at Gryttjom half an hour north of Uppsala. Here we own our own air space and can drop skydivers more freely, it’s kind of exactly outside Arlanda’s 80 km air space area so this place was carefully selected. The day we made the jump was a little extra perfect with good wind, perfect small clouds for reference, and typical good atmosphere. The altitude was 4,000 meters, above that you will need extra oxygen.

How did you record the skydiving sound effects? When you jumped out of the plane, did you have to press “record” on the recorder at the same time? 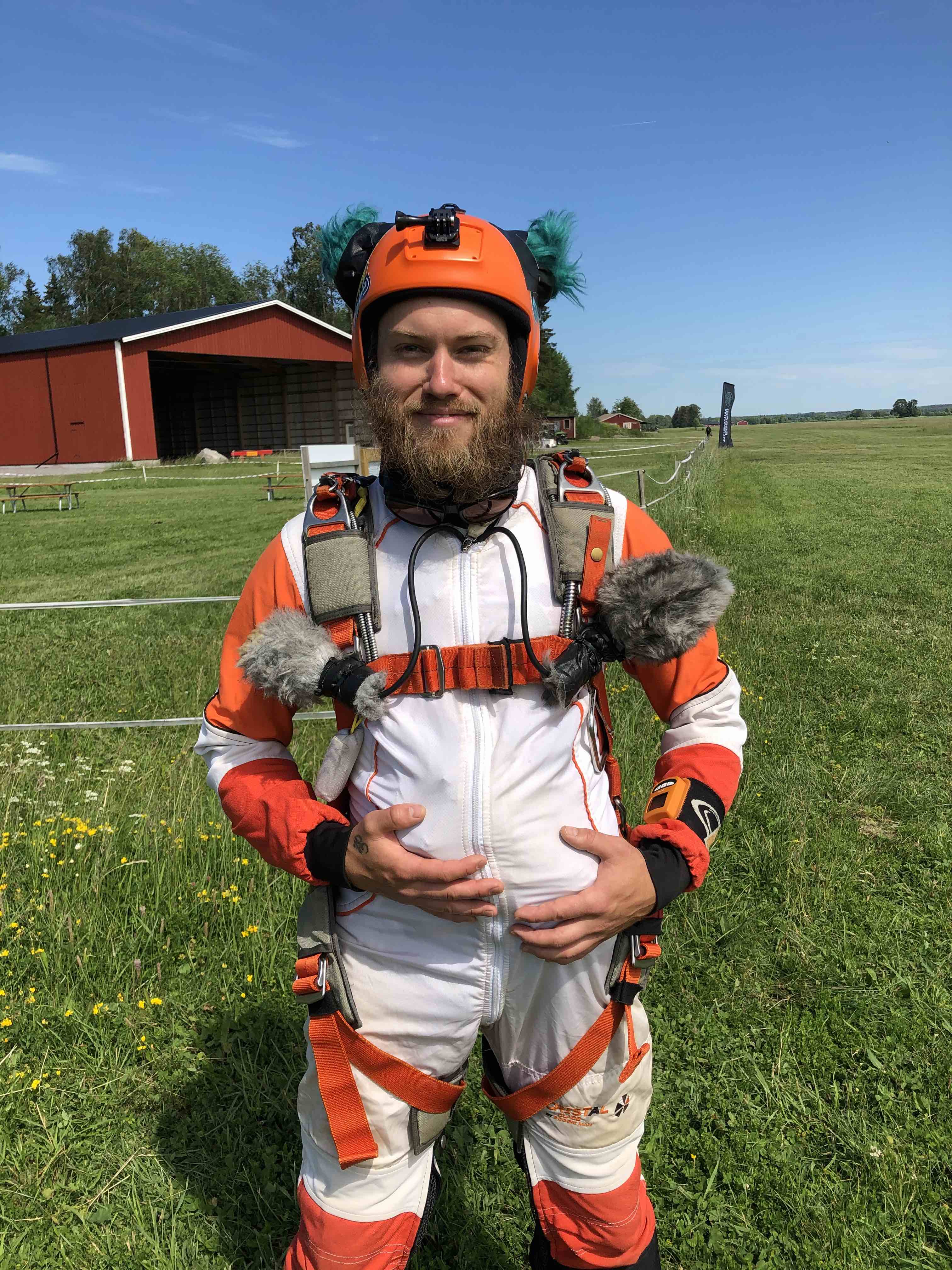 The recording team came up with an advanced setup that needed some time to get in place. I had equipment on my chest and stomach with microphones attached to the armpits and on the helmet. They started recording when everything was in place, and it was time to catch the load to 4,000 meters. So, the whole scenario from the ground up and then down again is in the recording.

What different skydiving and parachute sounds did you record during the jump?

We wanted to record as many different skydiving sounds as possible. There is one of myself standing next to the aircraft, entering the aircraft, takeoff, and then I did a couple of different free flying exits from the craft like on my back, diving headfirst, head up and ‘sit’ exit. The falling/flying speed varies from around 200 km/h to 300 km/h and is affected by the fall/flying positioning. For example, standing up is faster than being on your stomach. Also got some friends of mine to join me on the last jump. We got some nice parachute sounds from opening sequences when opening the chute and under the canopy I did everything from building up speed to some hard turns. The guys were also ready with recording equipment on the ground catching some skydiving landing sound effect.

And for you, when you’ve jumped out of a plane, what does skydiving sound like?

It’s surprisingly noisy. Imagine sticking your head out through a car window while driving at 200 km/h, that will give you the picture. It’s noisy and extreme but at the same time very peaceful and nothing on your mind except the present moment. There is no time to think about what’s up next or what you did the day before. For me it has become sort of a meditation. That’s maybe the core of extreme sports and other more extreme situations, that you are forced to be in the present moment.

The parachute sound effects when it’s opened varies and depends on the size of the canopy and how well you packed it. There can be everything from a “chiropractor opening” to a very smooth opening.

After deployment of the parachute, you slow down quite a lot, right? 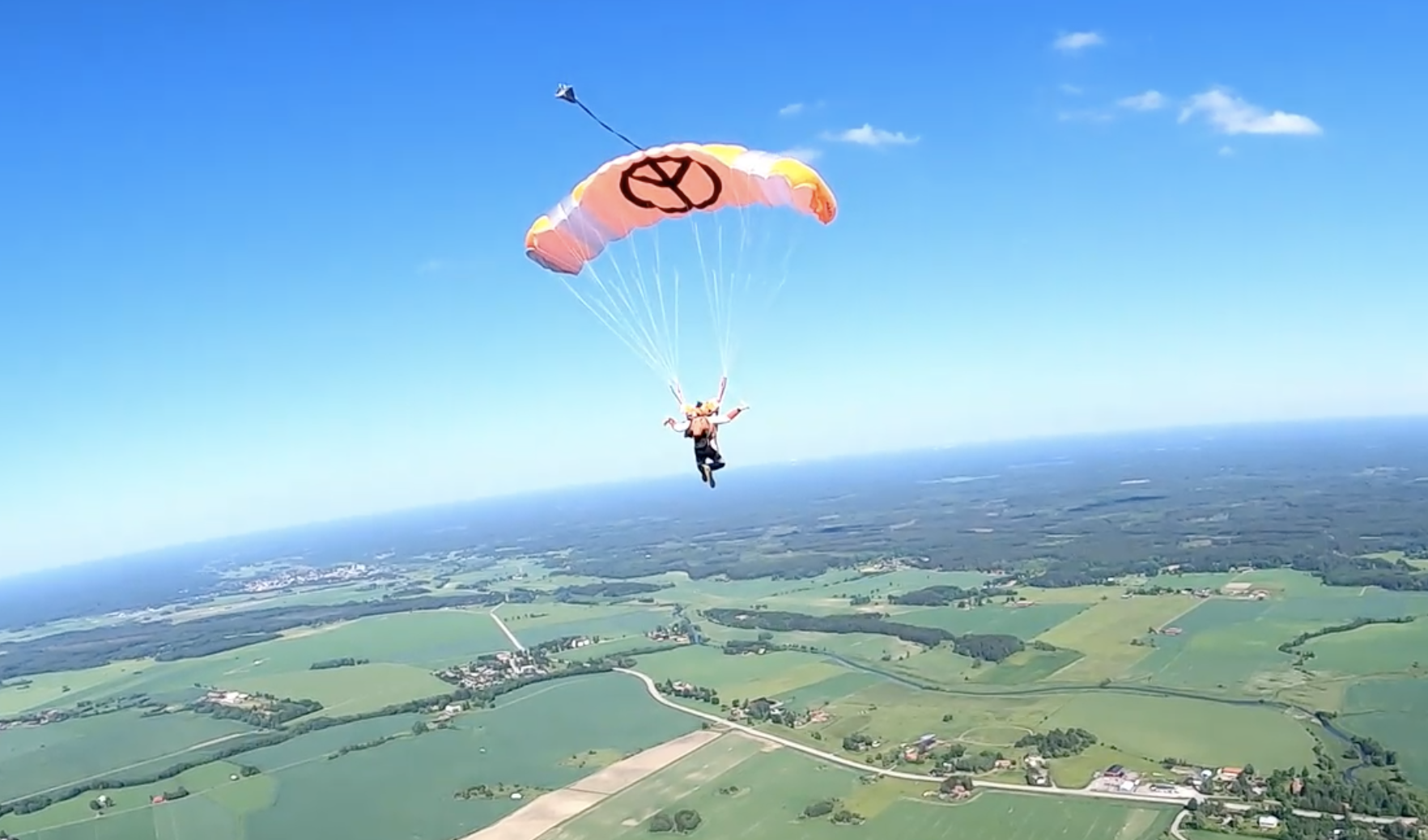 Oskar on a smooth sail down, rigged with microphones

We can pack the different canopies and rigs depending on how fast you want the canopy to come out and how smoothly you want the deployment to be. Go from maybe 200 km/h to almost zero in a few seconds and if the opening is as you wanted it to be it will be a pleasant ride. We always have to be ready if something goes wrong. If something should go wrong, you have to decide whether to fix the situation or cut the main canopy away and pull the reserve.

And the landing went smoothly?

Today’s canopies are masterpieces and very advanced. They give the skydiver a lot of control in the sky and help you make a controlled landing. I have a mid-sized canopy well calculated for my body weight and flying styles and for me, it is easy to do a good and safe landing. But there are smaller canopies where the aim is to do a fast landing after building up speed at a low altitude. For these types of canopies sports, we have a big water pond working as a big “mattress” if anything should go wrong.

So, Max Lachmann of Pole, why a skydiving library?

When my oldest daughter turned 18, she got a parachute jump as a present. I followed her to Stockholms Fallskärmsklubb to watch her jump out of the plane at 4,000 meters. The whole atmosphere and the people working there were just fantastic, it had a beach hang-out vibe to the place, only instead of surfing, people were constantly going up with a plane to jump out and parachute down. Sitting there waiting for her I realized it would be a fun sound library to make. The sound of the parachutes as they come down resembles that of small jet engines. I also realized that I have played so many games and seen so many films where you parachute, but I have never seen a sound effects library for it. Either that is because it’s just constant white noise, or it’s because no one has made the effort. So, I had to do that to find out.

Why didn’t one of you guys make the jump?

We wanted to record the sound of the parachute itself, and not death screams…. We were also interested in getting some professional moves in the air, something that Oskar pulled off like nothing. And personally, I’m terrified of heights.

The Skydiving & Parachute Library, what different sounds does it contain and how is it organized?

Since we had no clue what to expect from a field recording session like this, we approached it like a quest to find out what skydiving and parachuting sounds like. We simply tried to capture as much as we could from the whole experience. You can basically say that it includes three main types of sounds, the plane, a nice Twin Otter, and the actual skydiving and parachuting sound from an on ground perspective as well as from an on jumper perspective. So you will get onboard and exterior sounds of the plane taking off and during flight and landing, sounds of skydiving, deploying the parachute and parachuting down to landing from the jumpers perspective, as well as the sounds from incoming and landing parachutes from a ground perspective. As you can imagine, it’s a quite windy session, and not very loud sounds, so it’s not the easiest to capture the experience from the ground. The location itself was quite noisy with wind in the nearby trees, in the grass and with birds, insects and people. But we ended up with a total of 2.8 GBs of sounds, that has been carefully edited and embedded with metadata for easy use.

What equipment do you use to record skydiving? 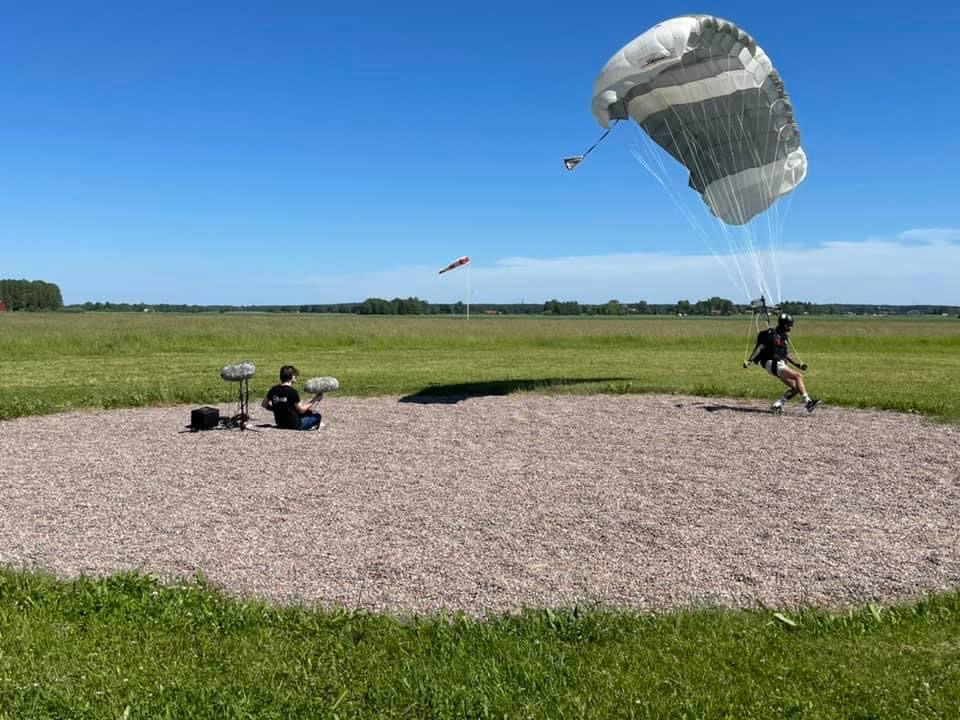 A parachutist landing next to Pole’s recordist Daniel

We had a Sound Devices MixPre 6 that was attached to Oskar inside his suit. Then we had two DPA 4062s on his helmet, and a pair of Sennheiser MKH 8020s on the shoulder straps of the parachute bag. It was all approved by Oskar of course before he went up. The fact that he is an experienced photographer, filming other people jumping, made it really easy to communicate and have him aligned on what we needed. On the ground we used a couple of Sound Devices 702s, a part of Sennheiser MKH8040 in Rycote ORTF blimps, a Sennheiser MKH8060 and a Neumann RSM191.

I guess you didn’t have unlimited amounts of jumps to do this recording. Is there a certain nerve to it when you only get one chance at recording what you are after?

Oskar actually made a few jumps for us, so we could quickly switch memory cards in the recorder and make sure levels were ok. But we could not really adjust microphone positions. As it turned out, the DPAs were great in some parts, and the Sennheisers in other parts, so in all we got a really nice recording. You can even hear how the skydiving sound changes as Oskar performs different moves during his free fall skydiving before he deploys the parachute. And of course, we also recorded tons of landings, since we had people coming down all the time during the day.

Do you have any plans to record similar libraries in the future?

We will always record things that are challenging and that spark our interest, similar or not. We’re up to record anything from burning houses to dropping destroyed cars from cranes. But it’s something adventurous about going that extra mile to see if you can record something that seems difficult or different.