The Highs And Lows Of 2022 From A Pole Position Perspective 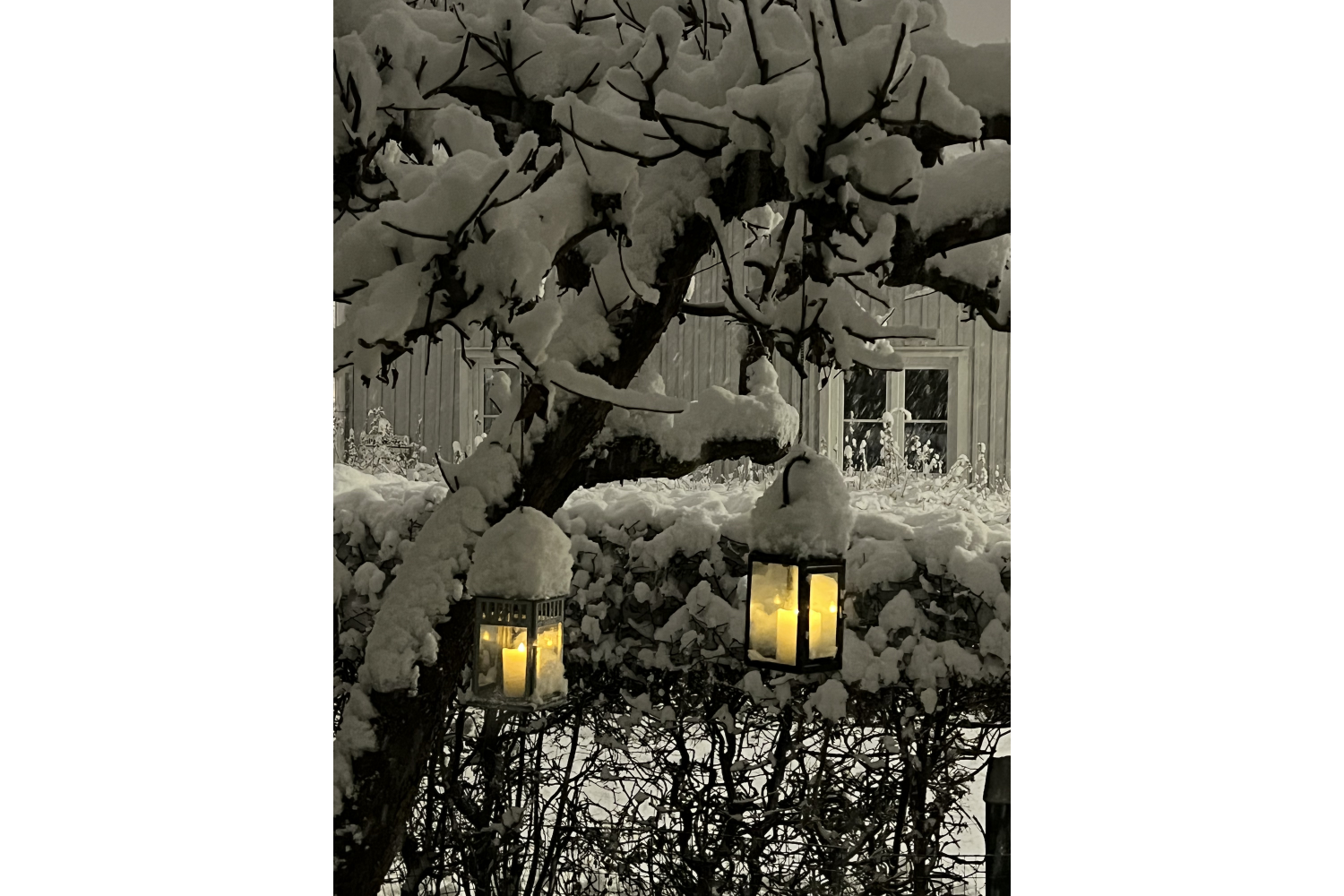 Software releases, shrapnel flying around a peaceful lake, wonderful compositions and an AK-47 fired in a bathroom – it’s been a pretty normal year with Pole standards. Welcome to the Pole annual chronicle of 2022!

We got to do a quite special recording on a shooting range. We had a big PA and played back sounds at 120 dB and then recorded the real world acoustics. Super exciting results!

When a client asked us specifically to use a TB-303 in the designs. We love it and we want more!

We don’t screw up…

…animal interference during a recording:

One of the crew dogs HATES it when we record whispers and hissing sounds. Lots of barking that we need to edit out.

Driving a 750hp race car on slicks when it was really wet.

Trying to get back to the room inside the Steam Hotel at the Pole conference.

We did a recording of highly explosive projectiles at Bofors test center in Karlskoga, Sweden. We got to capture the sound of them exploding 600 meters up in the air, with the debris falling all around the mics. Amazing, because there is so much movement when those objects crash towards the earth. Sometimes it almost sounds like a Star Wars spaceship is passing. 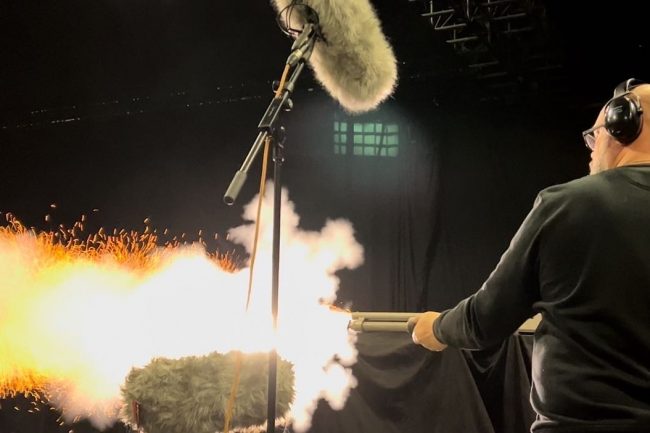 A few weeks back we recorded firearms indoors. Blasting off shotguns and AK47s inside a small living room and a toilet area was kind of surreal and weird. 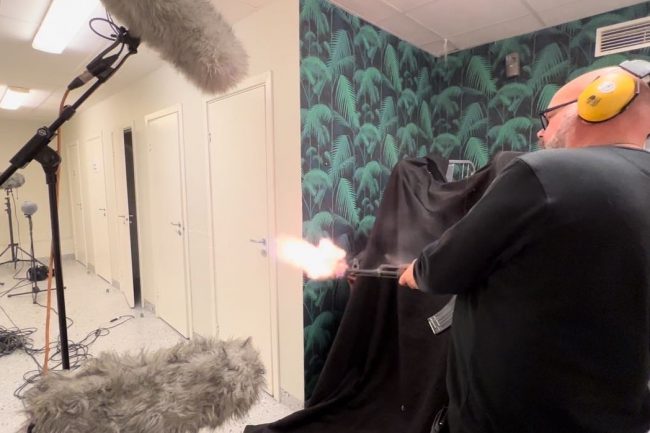 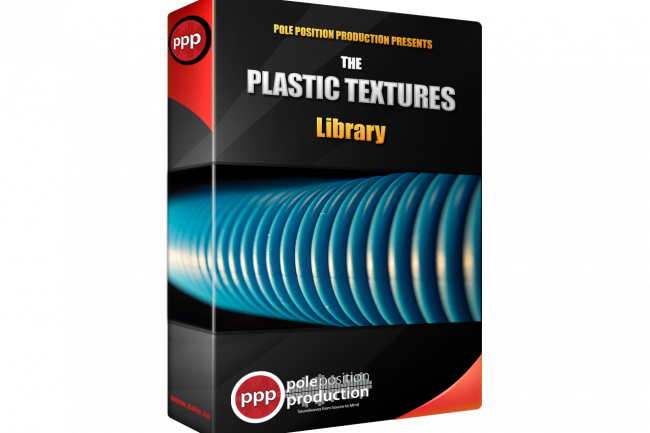 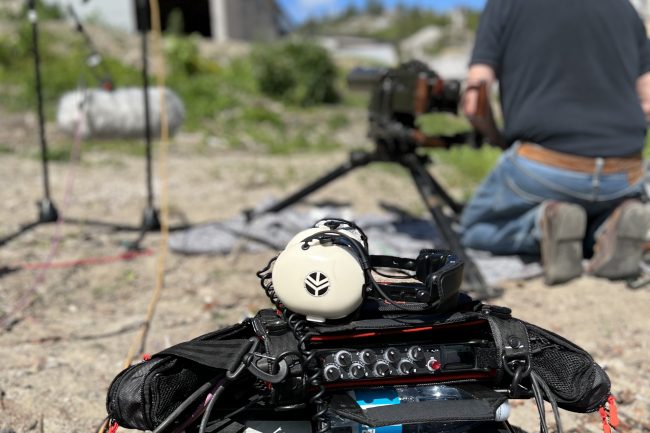 Recording weapons using a MixPre-10 and a couple of MKH 8060s goes a long way. 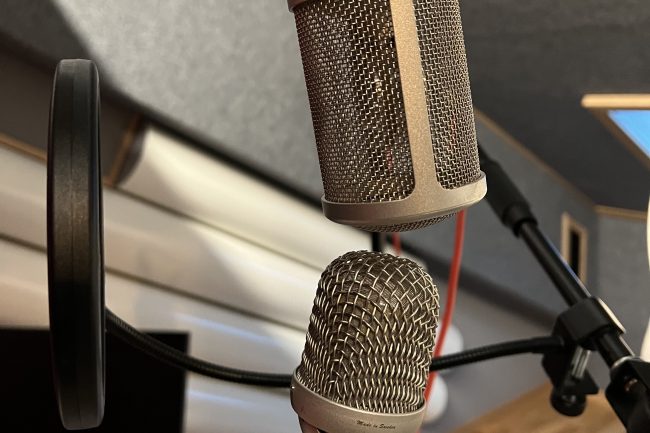 Then again, an Ehrlund M stereo pair are just gorgeous! 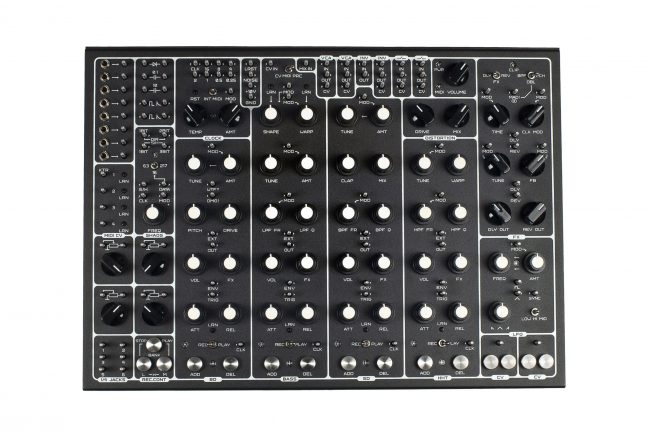 And you got to love the SOMA Pulsar 23 (quirky semi-modular drum machine).

But we must of course also give a salute to Ehrlund M mics as well. They are the best!

A huge electric engine rumbler, like what you can find in a PlayStation rumbler controller.

Some of us have done quite a few recordings for an upcoming music plugin that we are working on. For example, we brought all stringed instruments and other resonating objects that we could find; a key harp, a viola, metal-objects and more, and then we played with the bow on them creating the most fantastic sounds. It’s always so much fun experimenting with musical instruments like that, not trying to get the best qualities out of them, but instead achieving “other qualities.” Lots of overtones and harsh notes, perfect for sound-design and for creating mysterious or scary music.

We also did a music-piece using only coins as rhythm instruments; swirling coins, shaking coins, clanking coins, swooshing coins etc. For that we pulled out all the carpets, rugs and fabric we could find, and recorded the sound of the coins being tossed in the air and jingling in front of all the surrounding microphones, before falling down (almost) silently back on the floor. It gives a very short timeframe of action before gravity puts an end to each take, but it was very fun.

The Chief Rebel team has shown great collaborative skills. A+.

The small C77 team went from strength to strength during 2022.

We did a fun little piece for an announcement-trailer for Ubisoft’s new technology “Scalar”. We got to do all these little quirky orchestral arrangements, which was really fun. The film can be watched here: Ubisoft Scalar Announce Trailer: A Cloud Native Technology

We finally took the step to buy our own property to be able to build a new office in central Stockholm. This is a huge breakthrough for us and a bit of a leap of faith since it is a big investment. We are super stoked to be able to set up a creative space for ourselves.

A tiny needle against various surfaces for a syringe prop.

A huge Bofors cannon (15,5 cm Haubits). We recorded incoming big projectiles and were standing up by a lake, which was the target area, hiding behind an armor shelter with a plexiglas window to watch the impact. It was a most beautiful day with no wind, the lake was absolutely calm, the sun was rising above the nearby trees, and the birds were singing. Then all of a sudden, before you can hear any sound, the whole lake explodes and shrapnel bounces in all directions across the surface, and a few seconds after the detonation you hear the incoming whistle sound and the bang. Horrifying!

A few of us traveled to Silverstone Racetrack in the UK to record a vintage mint condition BRM 15, a 50s Formula 1 car. It must be one of the top 3 loudest cars we’ve recorded, an incredible wall of sound.

Recorded the Swedish war-alert signal which is tested four times a year at very specific times. We had mics at three different locations in the city, recorded from the window of the office and also inside (another part of) the office with closed windows.

A classic Ford GT40 race car that did not run on all cylinders. But hey, who does?

…equipment lost in the line of duty:

A bunch of microphones. What happened to them?

We got to borrow a quarry, and we had it all for ourselves for The Stone and Sand Library recording.

Recording the BRM F1 car from the 50s was quite challenging to say the least. We had two laps at Silverstone to get it all right, during the test day’s lunch hour, with no chance to check the recorders and remove all microphones immediately as it entered the pits to have it cleared for filming. The recorders had to be attached way inside the body of the car where the driver had his feet, so there was no way for us to reach it or monitor it once attached. Add to this the risk of rain, surrounding noise by other teams and planes passing by.

The big client review for C77 came back with only a handful of audio notes. Yay!

Minus 12°C outside. One of us and our camera woman stayed outside for 4 hours completely silent while another one of us sat in a modern huge wheel loader with a perfect 20°C cozy temp. It’s a moment to remember with compassion but foremost with malice 👺

The machine learning magic from companies like iZotope, Waves and Sonible is getting better, faster and more accurate each year. Looking forward to the day when they just casually remove all birds (from the recordings that is).

Our newest addition to Slack, the music sharing channel where everyone can share their own music. Anonymously if you want to. The gems that are posted in that channel, WOW!

The UPS guy coming round the corner as we were recording outdoor monster voices. He calmed down as he saw the mic stands, but there was a brief moment of horror for sure. 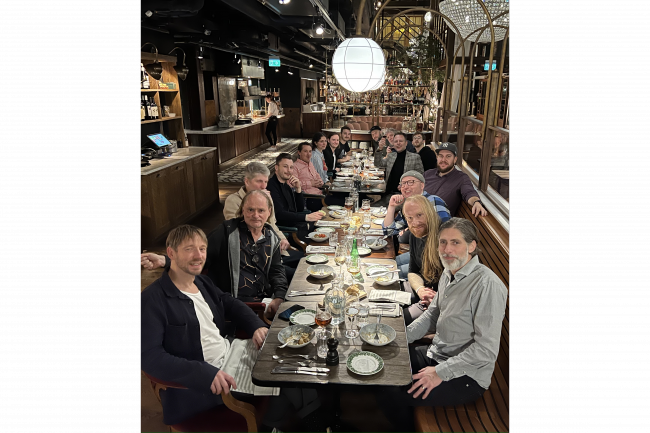 The annual Pole conference when we got to gather the whole team except for Paul who unfortunately couldn’t make it. Our daily meetings have to happen via video chat because we’re spread across different parts of Sweden and even different parts of the world. Even though it’s a blessing working with these kind, humble and at the same time amazingly skilled people everyday, the energy and enthusiasm, the ideas and insights that came forward when we finally could meet up at the same place, were hugely inspiring!

Who’s counting? BUT, during one of our recordings, it turned out one of the people present was in the cable tie business, and offered us to buy 100k cable ties at a good price. Most kind of him, but that was a bit too many even for us.

Organic sounding wood creaks for creatures is trickier than it would seem. But if they need voices – that’s where things start to get really interesting.

We got the job for Vermila Studios!

…goes out to Robert! He really came through when one of us Iost a very close family member and completed the milestone delivery on his own. Gotta love this man!

The Plastic Textures Library proved that plastic often doesn’t sound like plastic at all. These sounds have found their way into many of the explosions, voices and transition sounds we’ve been working on this year.

But also, seeing all the knowledge, talent and progress made by the team on various projects and self developed products, is by far the greatest inspiration.

Constantly chipping away on the mountain of knowledge there is to be had for Unreal implementations. And the mountain keeps growing as well!

We’ve been having lots of fun with Unfiltered Audio SILO this year. Also hard not to mention Reaktor because of its sheer modular awesomeness.

But of course we need to mention Reaper!

…helping hand from a Pole colleague:

It’s hard to mention a single one, as everybody is always willing to help each other. It’s heartwarming when you run into some dire straits, and everyone in Pole will rush and do their best to help you out.

Attaching emitters to sockets at run-time without an interface, for sure.

The ReaWise integration is pretty sweet and the best release of the year!

We wish you all a merry christmas and a happy new year! See you next year!