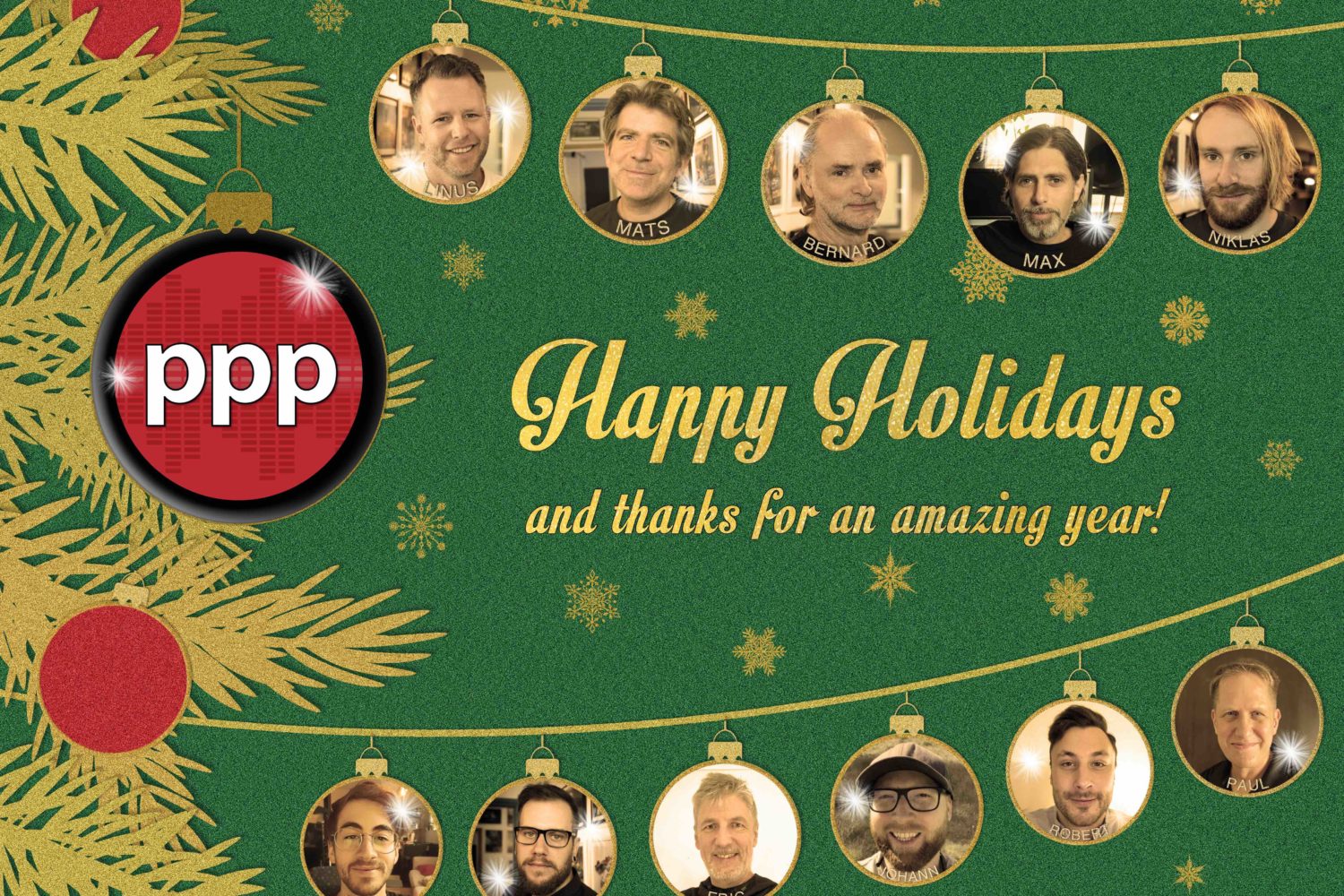 Pandemic, schmandemic – we marched into 2021 not knowing what to expect. Twelve months later we can look back on a year filled with hard work, lethal projectiles, elusive birds, good ideas, creative sound design, and, as always, a lot of fun.

Here’s the Pole chronicle of 2021, see you all next year!

We have done a few sessions where we recorded explosives and artillery cannons. It was loud.

We recorded a GP bike a few months back which was extremely loud and that was one of the loudest recordings this year (although not louder than the drag-car we recorded in 2017, or the pulse-jet snow-scooter). Anyway, the driver asked us if we wanted the normal or loud exhaust on. No surprise here, we always want the loud one, but nobody could imagine what that entailed for this one. It was super loud and some of the neighbors threatened to call the police before we could talk them out of that idea. Good thing we have the attenuators on occasions like these that handle the extreme SPL.

It’s hard to tell when working with such a creative force what idea was better than the other. The only problem we have is finding the time to act on all of them.

Adding a “spotting folder” of individual clips to new libraries.

Let’s bring some female soundpeople on the team!

How do we get these waves to sound hard and crashing? Fire!

Still a Sound Devices 702 with a pair of MKH8040s in ORTF. Nothing beats that.

But maybe also our new Sound Devices Scorpio. It has definitely made its way to the top list. It has a great user interface in addition to sounding great. 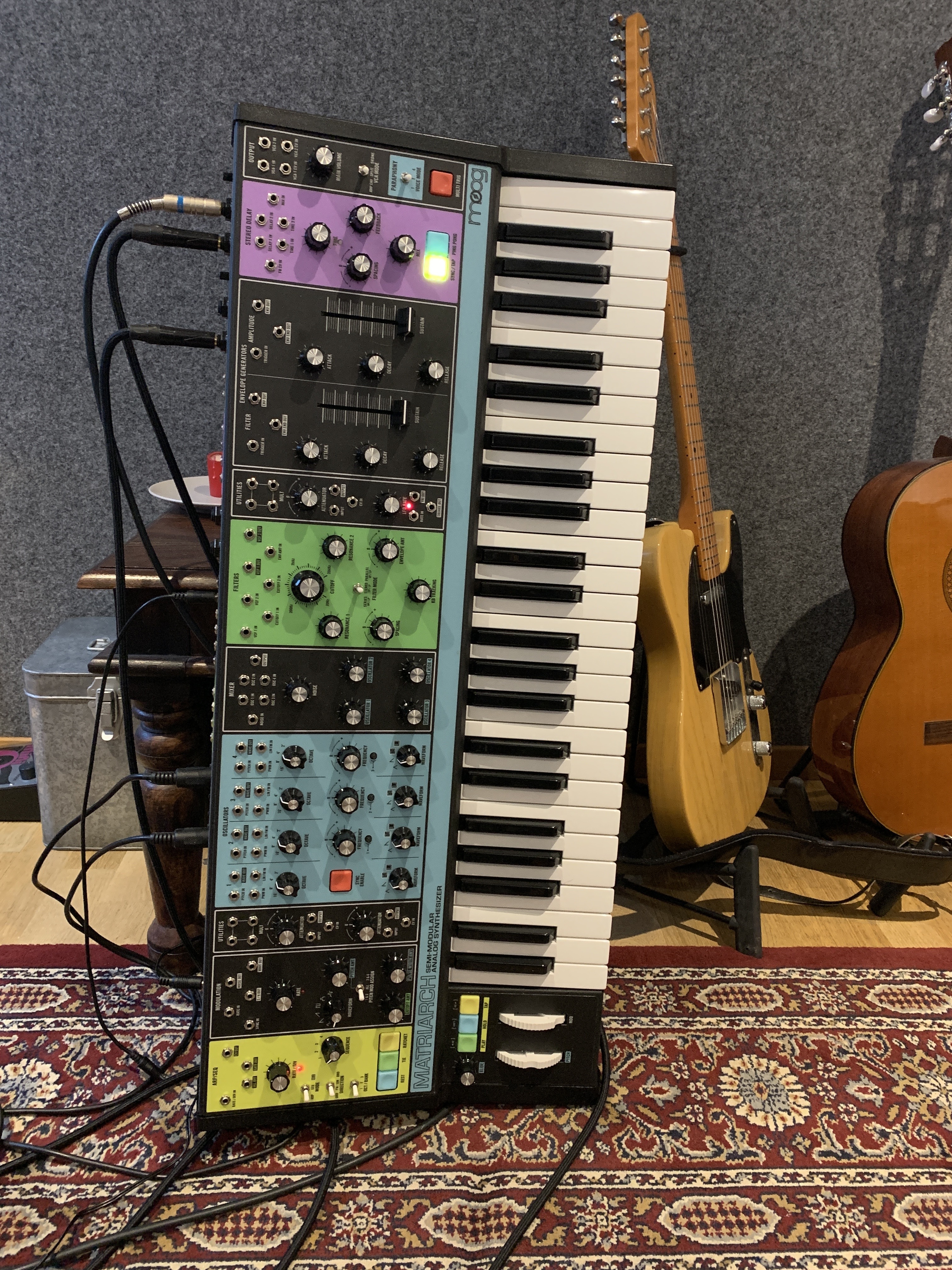 A go-to piece of gear during this year has for sure been the Moog Matriarch that we bought at the end of last year. It’s great for doing anything from classic leads to basses and paired with the Strymon Nightsky it’s super for sound design and ambient textures. A very inspiring piece of instrument!

The Ehrlund M’s in X/Y must be mentioned. This is the stereo setup we used to record our upcoming Stone and Sand library. Sounds amazing!

And how about the low noise on the Sonosax SX-R4+? It is superb!

6. Rubber Mallets (this is a treasure!)

More and more customers seem to understand that we are not only a vehicle audio company but an audio outsourcing company capable of managing music and sound effects for any type of game. So, coming from a position where we had to market ourselves and actively search for non-vehicle-related audio work, customers are finding us all of a sudden and asking us to take care of their complete soundtracks.

It feels like the world has noticed our work and what we do on a different level this year. There has been a high pressure on requests, and we are growing according to our vision which is a huge breakthrough for us. If it continues like this, we will reach our goals faster than we calculated so we are super happy about 2021, could not have been better.

The fact that we this year passed the magic 10 employee mark feels like a huge breakthrough. Not that long ago we were only 4 people.

The fact that we managed to have our annual Pole conference as planned, despite the pandemic, and that all of us could gather except for Paul who was stuck in Bangkok. But it was actually the first time some of us met in real life!

One of the most memorable moments was when we did explosions in Eksjö, Sweden. We visited the military who had rigged up all kinds of explosives. Everything from grenades to huge anti-tank mines. One thing that stood out was when we blew up a car with a vehicle mine. We placed the charge under the engine block and sent the car several meters up in the air splitting it in half. Altogether a great day which resulted in a recording out of the ordinary.

When the “Japan deal” was sealed. An amazing accomplishment!

After a year of digital meetings, it was when all of us except Paul finally could meet IRL again at the Pole conference.

Some of us have the habit of bringing a small recorder or phone out at night to record animals. This year we got deer bucks barking, foxes screaming, buzzards, and a hare fighting for its life.

We’ve recorded quite a lot of wind and leaves this year to an upcoming library. Unfortunately, this autumn was quite calm so this is something that will continue over the next year.

There are no odd requests.

Mats created the underscore for the Swedish TV series Deg (Dough in English). The whole scope of those eight episodes sums up to this years’ greatest composition.

The theme for a very cool upcoming app!

The creaking voices for creatures made of wood.

We have been making vehicle sounds for 15 years now, but we have never before been at the level where Robin is now when it comes to making engine loops. He is an absolute wizard!

There have been some challenging UI sound designs. It’s fun to design sound to more abstract things but also very challenging for the same reason. Thankfully we’ve got the perfect library for these situations: The Electromagnetic Library

The most elusive raven has been on our most-wanted list for years now. This year it finally came in range. In a hurry, we managed to set up a recorder, only to discover that the batteries died after 30 seconds of recording. The damn bird hasn’t been back since.

Anonymous crew member accidentally formatted the SD card on our Zoom F8 after it had been used to record the interiors of a vehicle. We have 2 Zoom F8 recorders and he assumed that the SD card belonged to the recorder that hadn’t been used yet. He was wrong…

Our old intern, Daniel, and Robert have come in and proved themselves as amazing team members and skilled and talented sound designers!

…most innovative recording set up:

We covered the inside of a tractor bucket with thick rubber to muffle it for the Stone and Sand recording. Worked surprisingly well!

…most innovative recording set up II:

The recording of rattling cupboards and dishes for an upcoming film called for some creative thinking and unusual methods.

…didn’t go as we planned moment:

When the game we were working on suddenly turned completely silent just hours before the important milestone. Turned out to be a simple syncing glitch that resolved itself just in time.

Having Johann come in as a programmer has been a crucial contribution to our team. All of a sudden, we have someone who can take over where it gets complicated as a sound designer – invaluable!

The Apple M1:s are coming, they are going to change things!

We recorded a frozen lake as the ice started to sing and crackle in the spring as the sun heated it during the daytime. An amazing sound!

Also, from the Stone and Sand recording. We got to borrow a whole gravel pit three evenings and used a 35-ton wheel loader to drop different stone and sand materials. One bucket could carry 11 tons of stones, so some big drops were recorded there.

We went with Kylotonn to record WRC rally cars in France just before the summer. The trip was at risk constantly due to bad weather and pandemic, but we finally got there and met with the lovely KT people and had a great time with KT and the rally team.

Maybe not a weird location, more so a weird moment. We needed some recordings of sneakers on wet grass, and we needed them fast. So, a volunteer crew member went alone to the closest park at around 2 AM and walked in weird patterns while testing out mic positioning. It took at least 5 minutes before he noticed he was being watched. The other person looked scared and asked what the h*ll he was doing. A short explanation was called for before they parted laughing.

…we finally got to record it vehicle:

We finally got to replace our old Nissan Skyline recording with a new one. We are getting loads of requests for this car, and have tried to record one for quite some time. But it has been canceled due to weather, broken arms, and whatnot. But now we have it!

The Sand and Stone library has been on our list for a very long time, but we’ve never had the time to record it. Now it is finally happening. Niklas and Robin have done some brilliant recordings covering the finest sand to huge stone blocks.

A re-visit to Bofors to record incoming projectile artillery. It was paused due to the pandemic, but this autumn we could finally go and record it. Super exciting!

A fancy midi interface (long needed) along with a SOMA Pulsar 23 (a quirky modular drum machine developed in Russia). The latter was maybe not so needed but very fun to play with and a great source of inspiration.

We have also grown a lot over the year. Both competence and sheer numbers have been added to the studio. It’s been a great year and there is a bright future ahead!

We have so many fantastic customers and talented people around us so it would be a shame to just point out one. And we are not allowed to mention some of our customers yet anyways.

…we nailed it moment:

When we officially wrapped the Volvo research project with some great findings.

…we nailed it moment II:

When every single sound designer at Pole teamed up to meet a very tight deadline.

Standing in an armor shelter waiting for an incoming artillery projectile fired from 10 km away and calculated to impact 500 meters in front of you is quite scary. Especially so since you see it hit the target many seconds before you hear it hitting the target.

Probably when recording vehicles while Bernard or Robin are doing doughnuts around you.

…a recording we would never:

We were once asked to record a WW1 one-man submarine. No one raised an arm.

“Would you guys be interested in doing the sound for our new movie called Dune?”

We blew up a Sennheiser MKH 8020 in a Rycote when we recorded explosives with the military for our Warfare 2 library. It was just a stroke of bad luck and being too bold. Shrapnel hit it, and it got eggshaped and could not be fixed. May it rest in peace.

Dear old Zaxcom has finally been put in retirement. But what a workhorse he’s been!

A puppy ate a Macbook adapter.

…wish for next year:

We can’t say what’s in discussions for next year, but even if just some of it happens, we are in for a very exciting year!

At the yearly conference when we were all assembled, realizing how much skill, knowledge, and curiosity we have between us. We do have quite a few balls in the air at the same time, but still, manage to stay focused, hungry, and raising the bar constantly!

When a highly admired Sound Designer, working on some of our favorite TV-shows, bought the Cinematic Transformations library!