Metadata part IV: It started out as a secret weapon 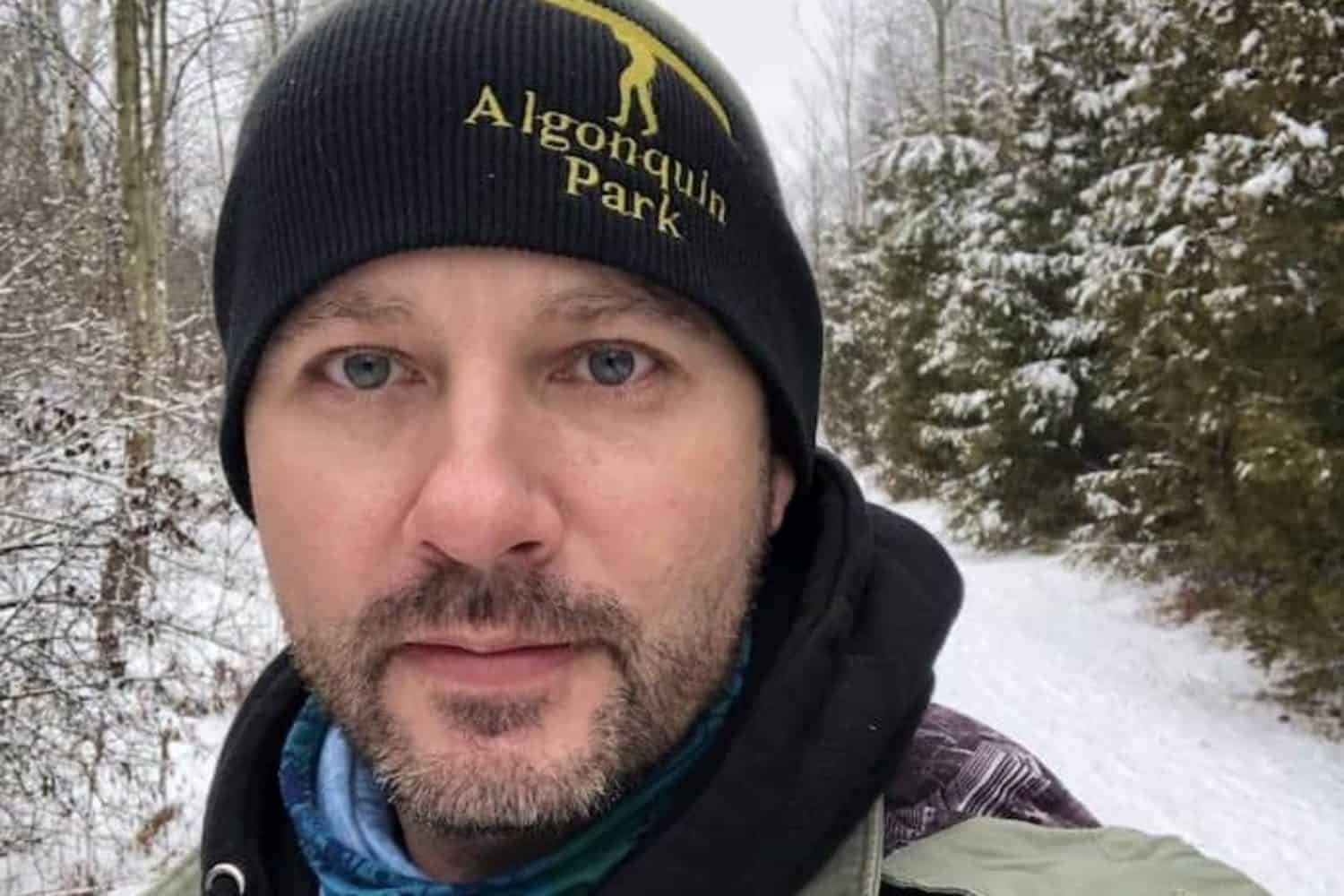 “That has sort of been an unwritten mandate to Soundminer over the years.” We’ve spoken to Justin Drury from Soundminer about how it all started and what Soundminer is really all about.

Justin, how come you started working with audio and what lead you to start Soundminer back in the day?

I went to Sheridan College here in Ontario, Canada, for Media Production. This encompassed Video, Film, Multimedia, Television and Audio. In the first year you took classes in all disciplines and then chose a major. I just really gravitated towards audio, and seemed to be pretty good at it, so I choose that as my major. In second year, a fella named Greg Mason called the school looking for someone to help out producing a syndicated radio show called The Parent Report. They had just moved to Sound Designer II and one of the first versions of ProTools. My teacher Garrick Filewod knew how computer crazed I was (I had learned 6502 machine language on the Commodore 64 growing up!) and recommended me. That really got me into audio and computer’s, on the cusp of the transition happening. Looking back, it all seems so primitive! From there I met the composer of the show, Rob Rettberg, who became my mentor, and I went to work with him out of his basement. Commuting by train, reading manuals, and just absorbing everything I could. Rob went on to open a studio called The Other Studio where I worked on a lot of commercial post and dabbled a bit in music production. My colleagues at the time (Nick & Alex) all shared the same passion for technology, and we all just fed off each other. It was there I opened the about box in ProTools, read that it was made using MacApp and a “object oriented programmed language”, which to me sounded like building blocks to make applications.  How naive! I ended up saving up money to buy Codewarrior (a C/C++ compiler) and that’s what got me into audio programming.  At the time it was just making a program to spit out MESA patches which I could use in my Akai sampler, but it was enough to see how much time I could save. Rob ended up moving to L.A. and I really wanted to get into proper audio post production, so I moved to Crunch Recording Group run by Steve Pecile and Joe Serafini, who later became my partners in Soundminer. 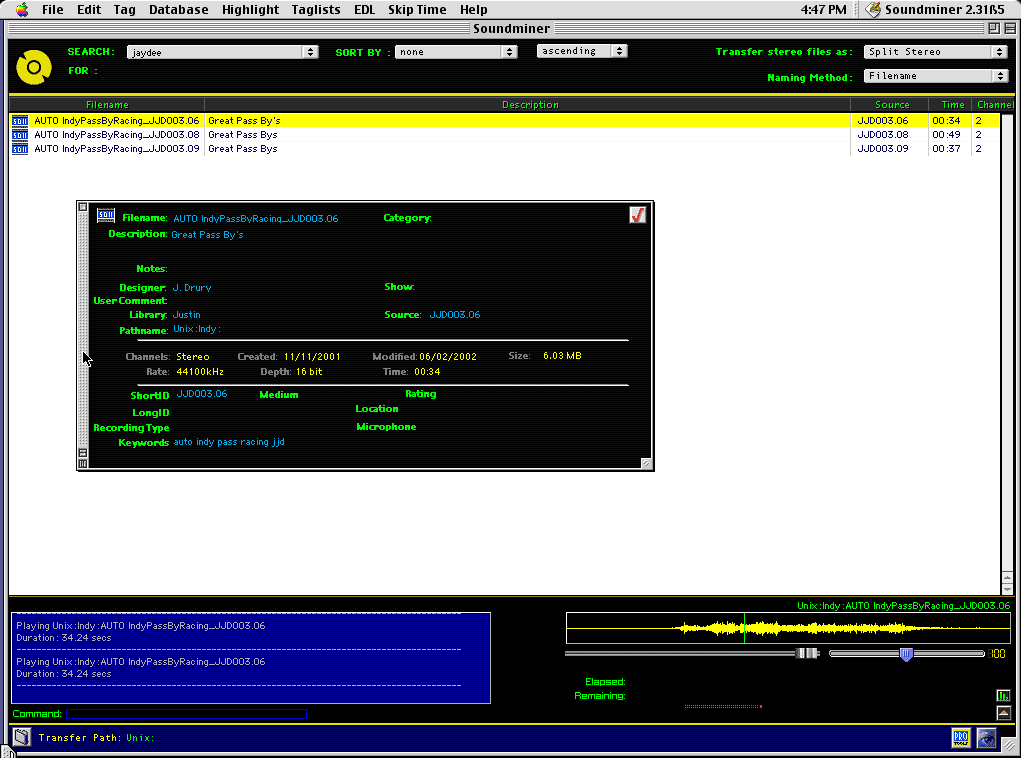 Crunch at the time had a CD Jukebox and a program from Sonic Science to real time load in sound effects into ProTools. So, you’d want an ambience, you’d find the listing in the app, go and audition (although you’d just record in case it was good), wait for the arm in the jukebox to grab the CD, and cue it. We used to use disks we used a lot at the front so the arm wouldn’t have to travel that far! Around this time, hard drives and Jazz/Zip drives were coming out, so you could digitize your own recordings and store them feasibly. It was very exciting, but the technology just wasn’t there. People like Dave Farmer, and Gallery had cobbled together solutions using Filemaker Pro, and co-incidentally I had done the same thing with Filemaker and SoundApp. It was originally called Soundmine and just used by a few of us at Crunch. Anyway, over the course of a couple of years (starting in earnest in 2000) the first internal version of Soundminer was born. Using lots of other little applications and utilities, most that I wrote to do its work.

When did you decide to launch Soundminer on the market?

One of the missing parts was getting the sound into ProTools still. ProTools had no drag and drop or workspace at the time, so the only way to import audio was to Command Shift I, navigate to the folder manually (or using OS9 extension apps to allow dragging it into the open file box). But the sonic science app had a way to spot a sound direct to the timeline at the current cursor. Steve Pecile and I went to an AES show and showing the Digidesign/ProTools folks the app as it stood and why we wanted to spot to timeline.  They agreed to share the code needed if the program went to market. I, personally, never thought it’d be something we’d sell, just use it in the studio, and have it as our secret weapon if you will, but Steve and Joe weren’t afraid to get into something and pushed it to happen. Then over the years, Steve and I would go to trade shows and do little city tours, staying in some questionable places at times (a roach infested hotel in L.A!), slowly convincing people to take a chance on us.

How has your offering developed through the years?

The program has changed quite a bit since the start. It’s always had a sound design aspect to it, with the ability to pitch sounds and transfer through VST plugins, as it was always about saving time. Why transfer a sound into ProTools, just to do some (at the time) complicated routing when you could do it in the app and hear it right away? That has sort of been an unwritten mandate to Soundminer over the years. As someone who was used to 80-hour work weeks in post production to reach a deadline, any second saved was precious. I used to sometimes have the laptop next to me in the studio and would think… well if I add this feature in, I’ll spend 3 hours on it, but it’ll save me so much more going forward. 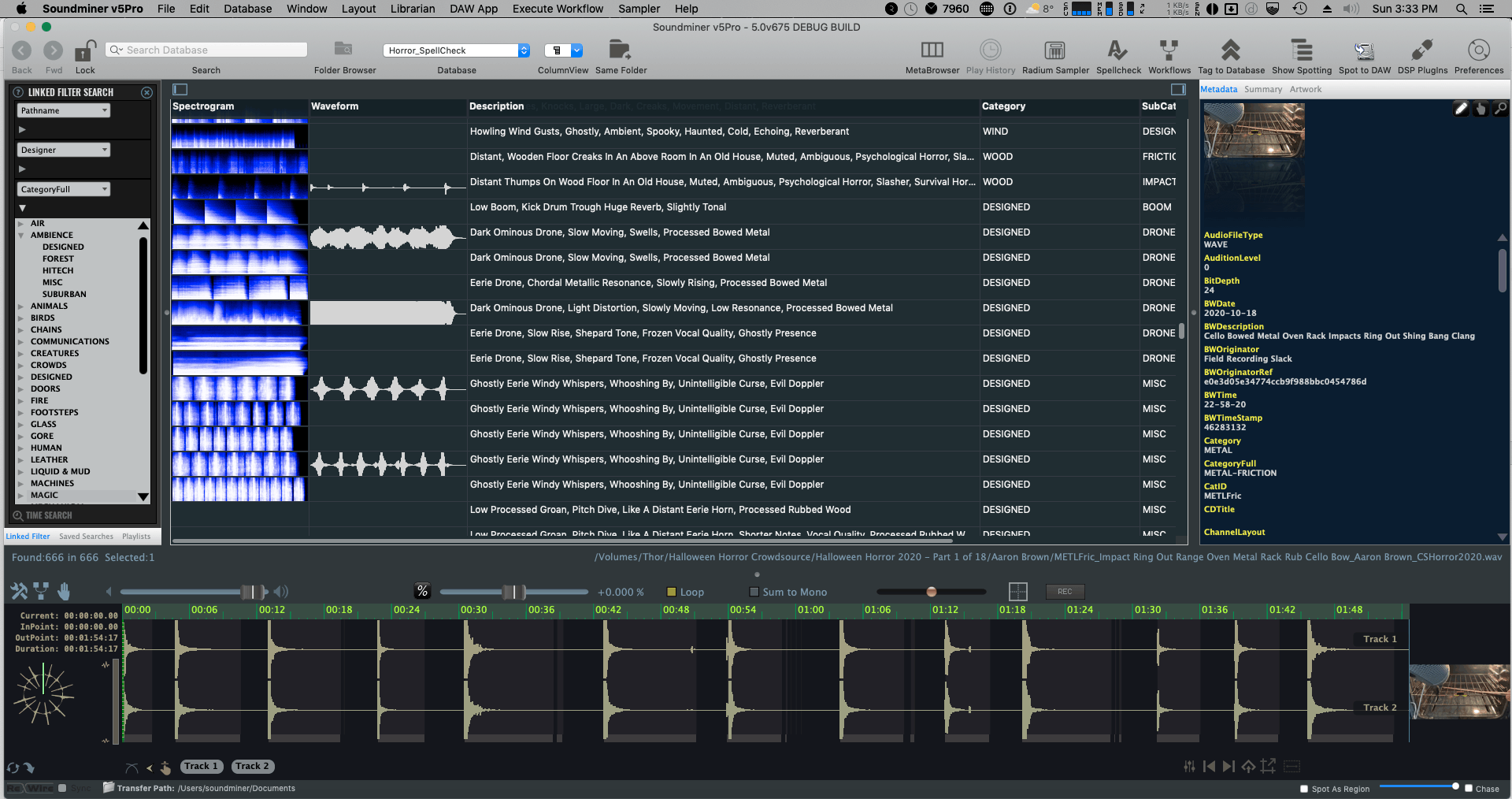 The program has just kept going forward, leading the way in features and how a sound librarian program should work. We’ve become good curators over the years, and a lot of thanks have to go to the users who will stimulate an idea. Steve handles the production music side of things pulling in the needs from that community, and I have close relationships with a lot of post people. We now have user’s all over the world using the program for simple metadata embedding, to using the program to do the lion share of sound design duties.

Through the years you’ve released several innovative products with features such as all-in-one application, embedded metadata and editor, multi-field metadata wrappers and dynamic databasing. What would you say is the core of your product development process and what propels it forward? 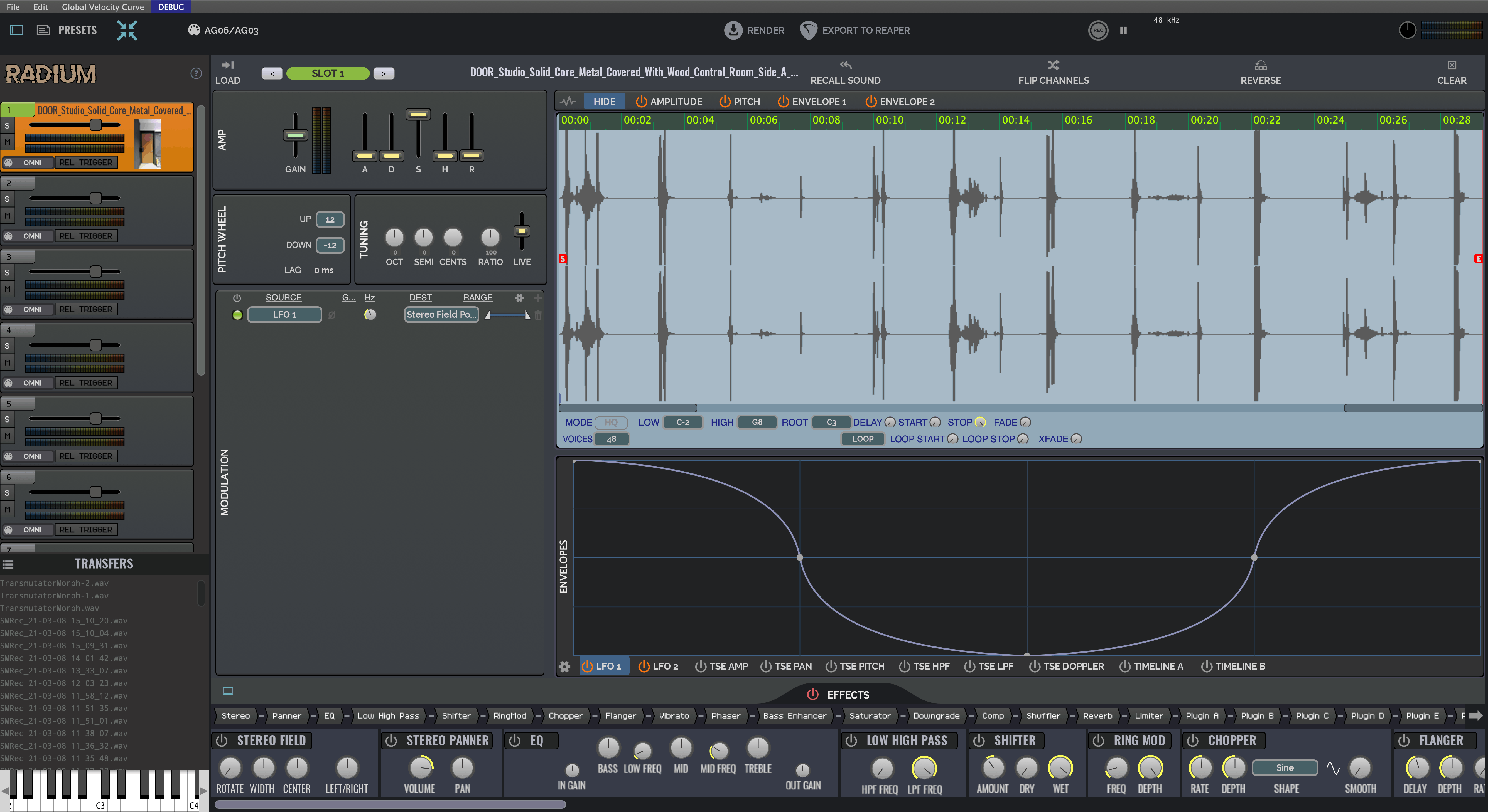 The Radium sampler built into V5Pro and available in the ProPack module for Plus on Mac/Windows has really been fun and challenging to develop. We’ve tried over the years to align with various sampler plugins, as my Akai experiments from 1999 taught me, just getting sounds into a sampler and ready to play can be painful. But once in a sampler, the performance aspect is unmatched. Depending on how you look at it, fortunately those talks went no-where and after a visit to a facility in California I was convinced to take a stab at it. Something simple… 4 channels, ADSR envelope, ability to reverse. That was the mandate, 3 years later, here we are with something that would make a lousy music sampler, but for Sound Design, we hope, can be a real joy to use. I’d say it was one of the most challenging things I’ve done. My pet name for it is `stupid thing`! During development a small number of people helped discuss it, Tim Walston had a ton of great ideas, I’ve got most of them still saved to keep me busy for the next decade!

During the last months we’ve spoken to several people in the industry about metadata and how it’s used. How is metadata used in your products?

Over the years, Tim Nielsen has also been instrumental in a lot of the new features. UCS was implemented to a degree already within the program via some custom scripts that were used out of the facility he works out of. So, it was promoting that to be part of the program for everyone. The benefits are abundantly clear to us. A librarian program benefits from well entered and organized metadata, there’s nothing worse than called up a category list and getting 10.000 entries, picking one and getting one or two records back. Those who know and use a library intimately, know what keywords to search for, but someone coming in and browsing needs those faceting features to drill down into the database. Especially as databases containing 500.000+ records are very common these days. That part is nothing new, websites like Amazon have been doing that for years. I know there are detractors against the filename, but that’s really just a carrier for the most important metadata. And in Soundminer at least, once ingested, a filename can be changed and rebuilt very easily. For us, it’s the ease for someone to publish a file that can be used by many programs. Reaper has a great methodology now using the USER tag in iXML, so any arbitrary field can be embedded into wav/flac files, and Soundminer is able to read and write those fields too, but at its simplest a filename can expand to hold a lot of information.

The field recording slack is a testament to the system. If you contribute you get files back from 130+ submitters, and by dragging them in everything is just ready to go. No more track1.wav files! There are still some hiccups and the organizers that run those still have to do too much work, but it’s all steps in the right direction.

What are you guys working on right now? Will there be any new releases or updates from Soundminer this year?

As for what’s next…. I suppose I have to go through all those great feature requests!