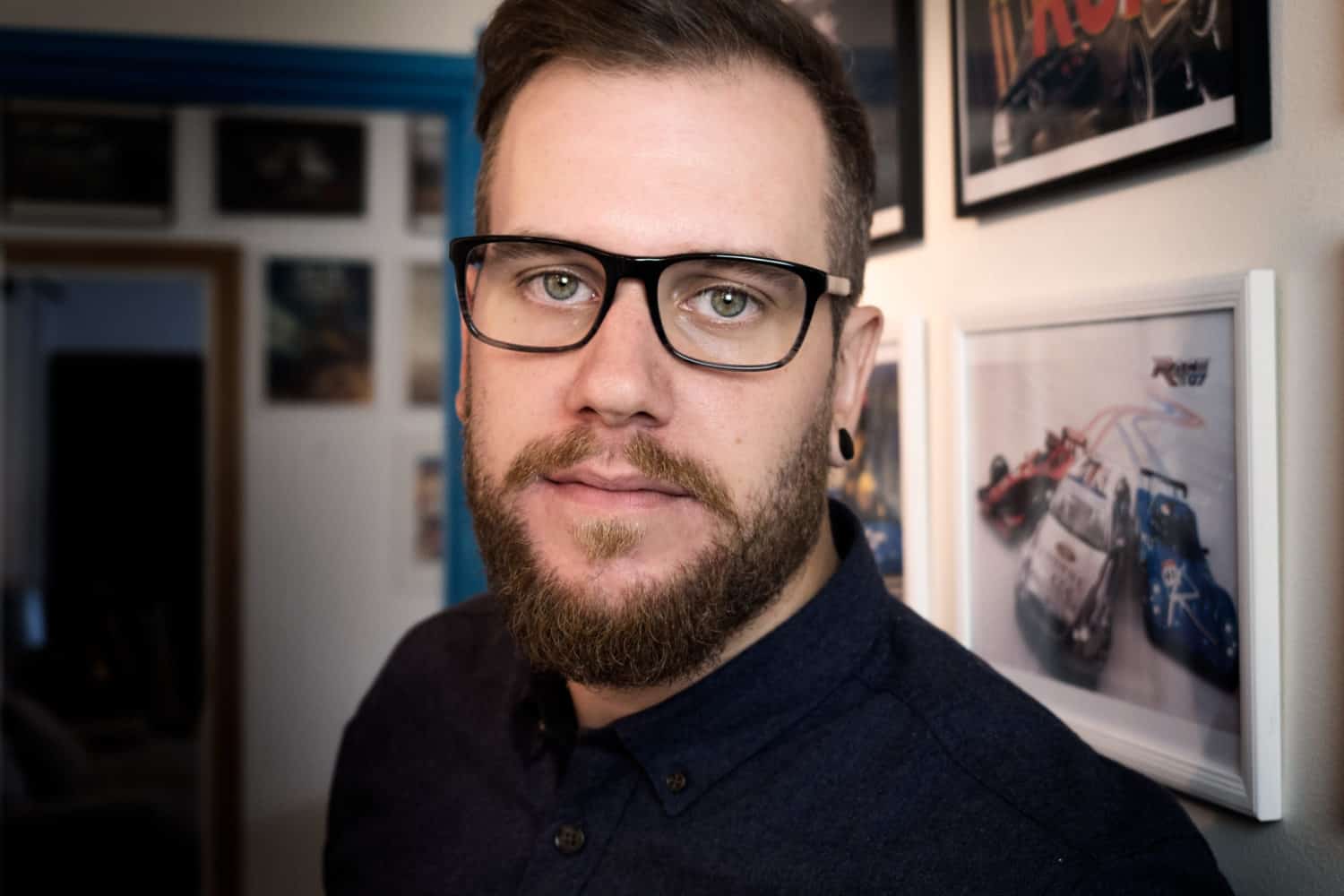 He can swing a hammer with meticulous precision and he’s been a motocross racer. Meet Robin Olsson, newbie (sort of) at Pole Position and sound lover.

Robin, what’s your role at Pole?

My primary role at Pole is field recordings and sound design but I also come up with and build props we can use for different recordings.

Tell us about the different tasks you perform during field recording?

During an ordinary vehicle recording I do practically the same as the other guys. Rig the car with mics, prep recorders, rig the track with exterior mics and that sort of stuff. When the recording starts, I usually stand on one of the exterior positions with a shotgun mic and an ORTF. Every now and then one of us needs to ride in the vehicle to communicate to the driver what we need out of the vehicle and I do that also. In some recordings that are not engine related I build stuff before the recording starts. It could be some sort of weird pipe “instrument” made out of steel or it could be concrete block to drop at stuff.

How come you started working at Pole?

I had just finished two years of Sound Engineer/Music Production school and my brother Niklas had started to work with Pole. They were in need of someone to help out during field recording, so I was more than happy to help out. The first recording was a trip to Poland to record 12 different vehicles. After that session I was hooked. I’m an avid gamer and have an interest in cars and other vehicles, so Pole is just the perfect match for me. For the last two years I have slowly started to work more with the team and as of May this year I work full time with Pole.

Before this I worked as a blacksmith but wanted to get out of the dirty clothes.

My grandpa started a blacksmith shop in 1973 and he wanted to retire, so me and my dad took over. I did that for almost 10 years. Don’t get me wrong, it was a great job but an opportunity like this, you just don’t pass it down.

But being a smith must be quite different from what you do at Pole?

Yes and no. You get to use your creativity in both fields but in completely different ways. I still get to use my old skills as a blacksmith sometimes in different projects for Pole. So, my skills with a hammer and that I can weld comes in handy sometimes.

So, me and Niklas have worked with each other in the past when we worked with landscaping for a few years, so it’s business as usual for us. We also play in the same band and have always shared the same interests. So, working together is more of a good thing.

When did you first start playing music?

Our parents have always listened to a lot to music at home. Bands like Led Zeppelin and Black Sabbath echoed around our house when we grew up. With Niklas being 8 years older he often introduced me to heavier music, which resulted in me wanting to play the drums. I started to play the drums when I was nine and when I was 15, I went to a music high school.

Over the years I have played in a few bands but now I’m in Black Oak with Niklas. We’re on the finishing push of our first full length album. So lately I haven’t played the drums that much. But we will hopefully start to play some shows this autumn. 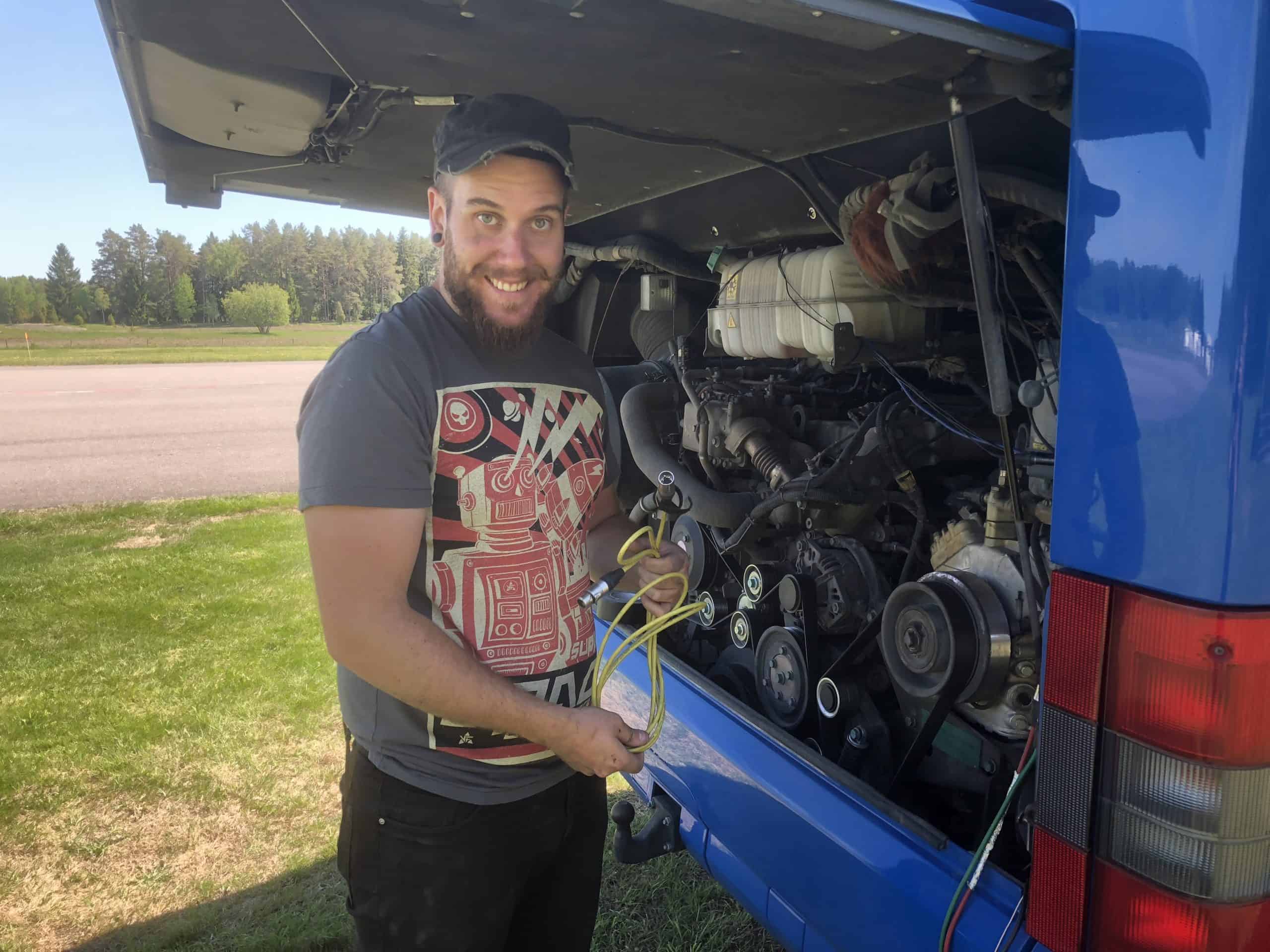 Getting the mics in place in a MAN bus engine.

Your background as a musician, is that an advantage in your current position?

I think it’s important to have a good ear when it comes to sound, especially cars. There are so many different overtones in a car. So, it’s good to have the ability to pinpoint them. If you have listened to distorted music for 25+ years the ability to mix car sounds comes kind of naturally.

You’ve also been a quadbike motocross racer. That background must be quite useful during field recordings?

Yes, in my teens I raced in quad motocross. Of course, I have an understanding of the engine and know how it works. Also, I know how a vehicle should sound and that makes it easier to both record the vehicles and mix them. It also helps that I have driven many different tractors and trucks in my upbringing as a farmer’s grandson, although not in the same extent as Niklas has done.

Sound has played a big role in your life. What is so special about sounds in your opinion?

Some of my best gaming experiences have been thanks to the sounds and music. I’ve always played Blizzardgames and they are so good at giving the animation life with sound. When it comes to games, sound has the ability to make dead things come to life. A digital character swinging an axe is nothing without the whooshing and impact sound.

What’s the best part about working at Pole?

When working at Pole it’s like going to a playground. We get to climb on WW2 fighter planes, ride in really fast cars, travel all over the world and that’s really cool. On top of that I get to work with the best people in the business.

And the most challenging parts?

I would have to say it’s challenging every day. But the times when we are recording in other countries is the most challenging. Often long hours to fit in as much as possible and sometimes in extreme weather. But it’s also the part that’s exiting. To work hard and get the result that you want.

The perfect project, what would that be?

I would love to work on some kind of RPG with spells and weapons. I don’t have much experience with that kind of sound design so that would be so cool.