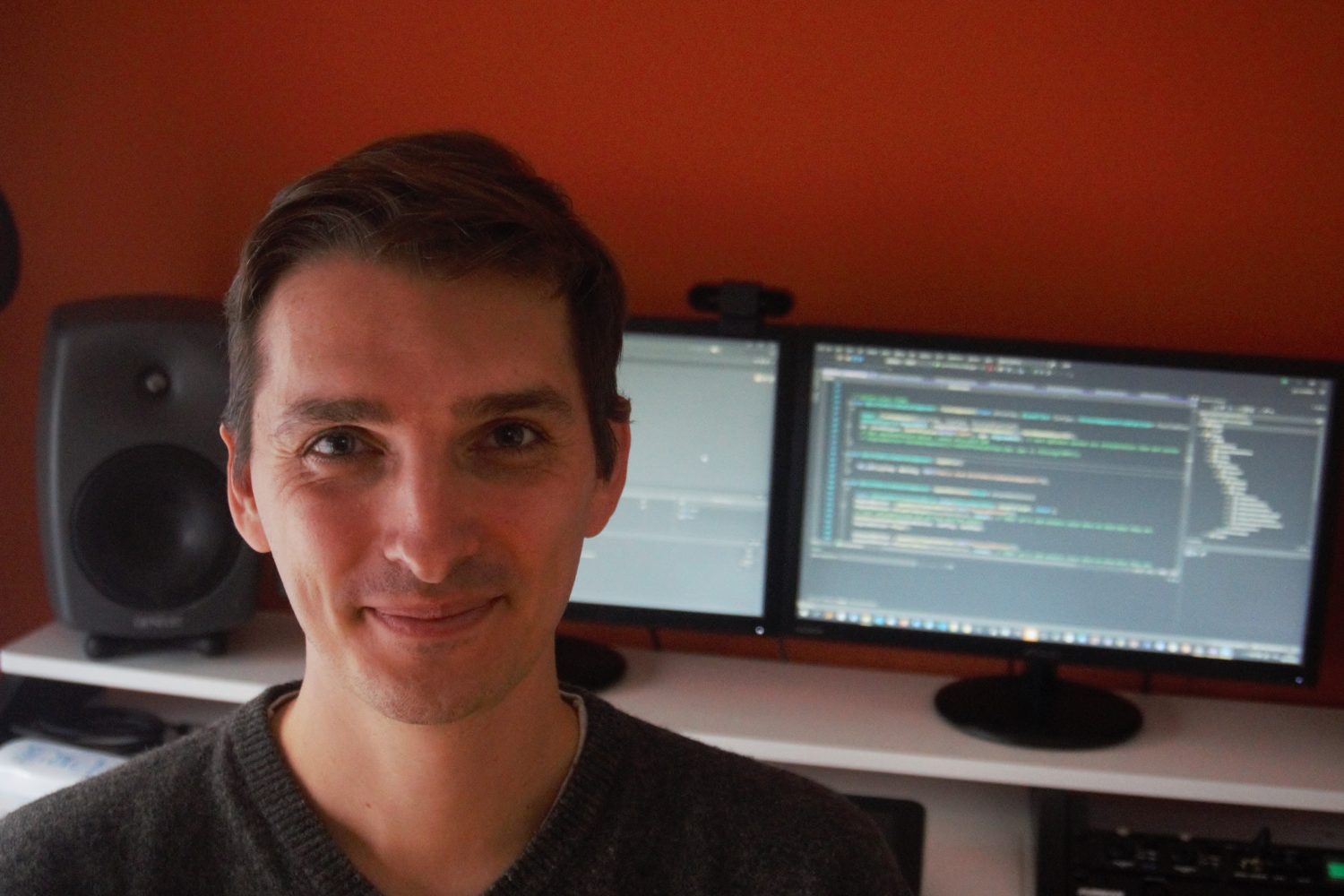 Lorenzo, you are the latest to join the Pole crew. As many of the others you have a background in music and in the gaming industry, and we will dig deeper into that later, but you also have a B.S.c. in astronomy, which I don’t think any of the others in the crew has.

As a teenager I was fascinated by the inner workings of the universe, and the ever-lingering questions of “where do we come from”, “why are we here”, “what is the answer to the ultimate question of life, the universe, and everything” (it turns out it was 42 all along!). In a broader sense I was interested in how things work, and I had a keen interest in mathematics and physics.

So, studying astronomy was a choice that would put together my interests with the promise of giving me a better understanding of our place in the universe. In fact, my preferred field was cosmology, and my thesis revolved around substructures in dark matter halos, which are fundamental in galaxies formation and their evolution.

But after that, you went on to become a sound designer instead. How come, and did you have any use of your background as an astronomer?

Parallel to my interest in astronomy I was also very passionate about music and guitar. I used to write my own music and then I started getting interested in how to record and produce the music I was making with the bands I was playing in. Once I finished my degree, I was more keen on working as a recording engineer and to compose music for linear media, so I started a M.Sc. in Sound Engineering. Ironically enough I left after my first year because it was too focused on the computer science side of things and there was no studio time.

Currently the programming side is exactly what I’m interested in. But at the time my interest laid elsewhere, and so I hopped on a plane to London and started looking for studios where I could work as a runner and learn the job in the studio. In the meantime, my interest shifted a little bit, and I was more focused on audio post-production for linear media. At this point none of the background as an astronomer was helpful, but the mindset that came with it led me to ask myself: “What if the audio I create was for non-linear media? How can this be made interactive?”.

So, I started studying the FMOD designer manual. Having been a keen gamer since I was 6 years old one would think that at this point the connection between non-linear sound design and videogame would be pretty straightforward. Alas, it took a friend of mine that while hearing me struggle on this conundrum for a while just asked me: “Well, why don’t you just do sounds for videogames?”. My brain exploded, and this is how it started.

What was your first job in the business?

While I was trying to build a portfolio to get hired by companies I had a few freelance gigs, one of which consisted in integrating Wwise into CryEngine. It was a fun experience, especially because there was very little documentation at the time. But it allowed me to learn a lot about the inner workings of game engines and middleware, which eventually was helpful when I was later hired by one of the biggest Italian companies: Milestone.

While working there I could really leverage all I’d learned both in that freelance gig I was mentioning and also at university, because I started thinking in technical terms, trying to solve technical challenges and optimizing pipelines. It was very rewarding, and it led me down the path of learning more about programming and scripting.

After 10 games with them I moved on to briefly work at Ivory Tower on “The Crew 2”, and after that I joined Codemasters for two and a half years, where I was allowed to work on a broad range of areas. Lastly, my last contract was at PUBG, where I took care of the audio for one of their new projects: “Thunder Tier One”.

Have you specialized in certain game genres during your career?

The first three companies I worked at were racing games companies, which allowed me to specialize heavily in this area, as well as meeting Max and the team at Pole, with whom I worked every time we had the chance. I worked on many MotoGP and MxGPgames, “The Crew 2”, “Dirt Rally 2.0”, “Grid” (2019), and helped a little bit with “F1 2020”.

The sound teams I worked with really allowed me to work on many things, from vehicle recordings and editing, vehicle implementation, mixing, scripting, finding technical solutions, putting sounds to trailers, assisting dialogue recording sessions and much more.

My last contract at PUBG was an interesting shift of focus for me because it allowed me to work on weapons, foleys and ambiences, but also take full responsibility over a project, including music supervision and voiceover casting and directing.

In your opinion, what distinguishes premium sound in a game and how is that accomplished?

I believe “great sound” always depends on how well the sound serves the project. People often experience sounds in a subconscious way, and therefore they have strong expectations. The goal in my humble opinion is for the sound to be almost “invisible”. It should do its job without drawing attention to it unless it is the focus of the scene.

In games it also has to be informative to the player, so that they can pre-act instead of react. The conundrum with sound is that it absolves so many functions in-game (provide information, evoke feelings, set moods) that it can be very hard to get right, but when you do, then it is extremely fulfilling for the player to experience.

How did you get to know the Pole crew?

The first interaction I had with Max was when I was at Milestone. We needed a two-stroke 125cc bike and Pole was the only shop that had recorded one! So, we got in touch and then we started asking for more. When I later moved at Ivory Tower, and I had a lot of cars to create, guess who had many of those we needed and, also were able to record more? You guessed it: Pole!

And lastly at Codemasters I finally was able to see Max in person alongside with Niklas because they were already in the UK and there were cars we needed that we had a hard time to find, so they were kind enough to visit us and talk a little bit. We kept in touch ever since.

And now you are joining the crew, as a programmer. How come?

Well, given my background and my path in the industry it really is the natural way forward for me. I found that I really loved solving problems and so I started studying programming in my spare time. It allows me to leverage the technical knowledge I acquired in university and to apply it to real world problems that sound designers face on a regular basis.

I don’t have a specific domain yet but going forward I am really interested in applied Artificial Intelligence and Machine Learning related to Digital Signal Processing, so much so that I am considering taking on university on the side next year. We’ll see what the future brings.

As a programmer in this line of business, how will you benefit from your experience of working as a sound designer?

I think that having worked as a sound designer helps me in better understanding how a tool will actually be used, and to think outright at what are the things that will make a user experience easier. Also, I think it will help me to not stop at a mathematically “correct” solution, but to intently listen to the result and by being able to judge the quality of the result to drive myself to find more pleasing solutions to the ear.

How will you being onboard affect the Pole business?

I really hope that by continuously improving my craft I can help Pole explore new areas of audio software and to push its boundaries further into the innovation territory. I also hope to be able to help them provide more programming support to projects that might benefit from it.

Have you already started with some projects?

I have started working with Johann on a really cool internal project which should be really useful for the team and has also great potential to scale outside of Pole. I’ve also started to help on other projects, but I’m not really sure what I can talk about, as most things are covered by NDAs.

And finally, what are you looking forward to the most for the last quarter of the year?

I have a few hiking trips lined up here in Italy (where I work from) that I would love to do before the climate gets too rigid. I am also very much looking forward to taking a trip to Stockholm, which I’ve never been to, and meet the rest of the team! Also, Christmas. It’s a tradition in Italy to gather with our relatives and it’s something I really look forward to as it creates an atmosphere of love and unity, something that we really need in the world in these tough times.