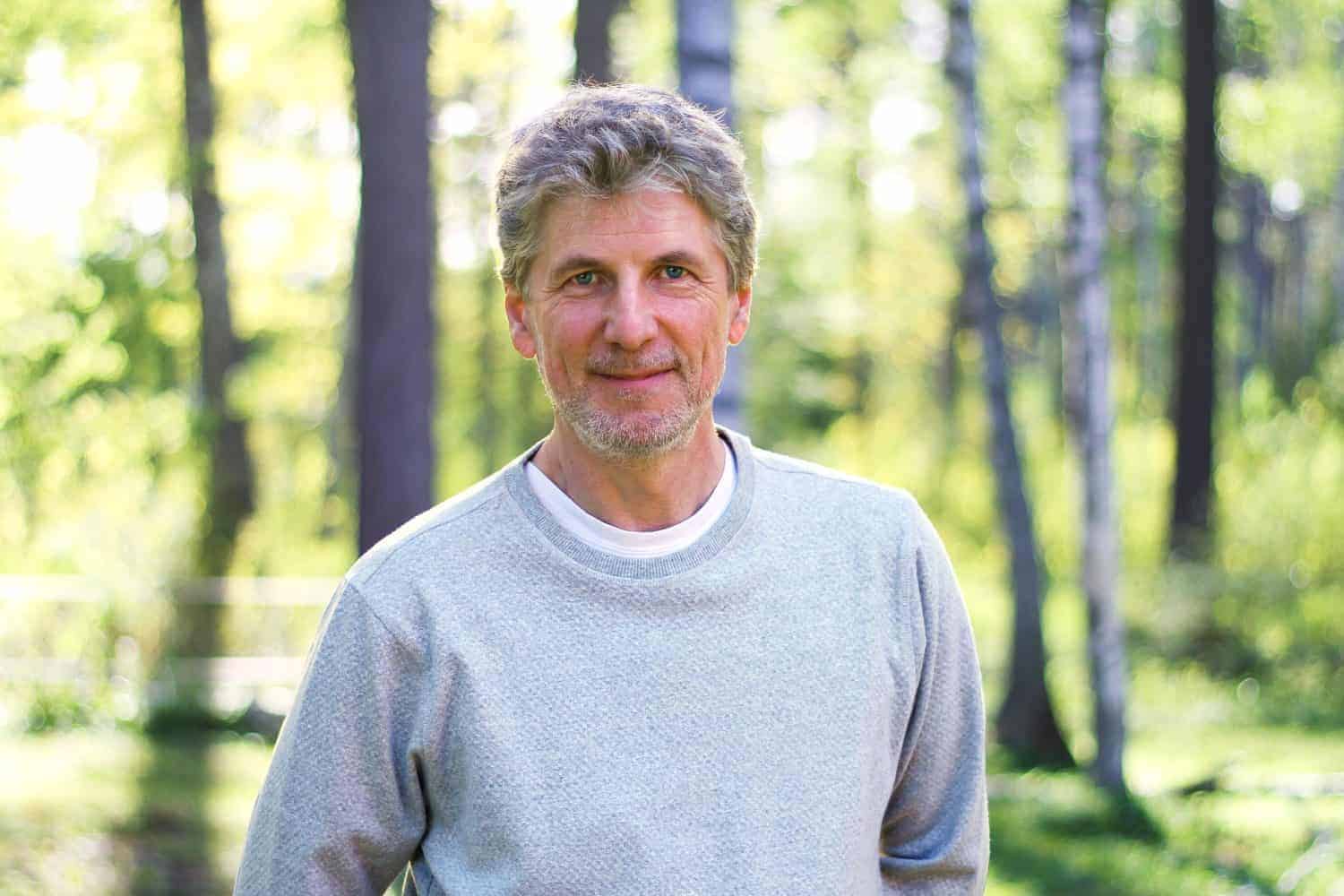 He’s designed sounds for mega stars like Madonna and Paul McCartney and he’s created a devil’s voice that almost scared the audience off their seats. At Pole he is mainly involved in audio post production – meet Eric Thorsell.

Eric, tell us a bit about your background?

Well I guess you could say that I’ve been into sound more or less my entire life. At the age of 7 I forced some friends to embark on a drama project recorded on C-cassette, where my first attempt at sound design was towards a police siren. For some reason the woeful result didn’t discourage me and I just kept on trying, replacing my collaborators as they grew tired of the increasingly ambitious projects.

Piano lessons led to playing in a band which led to more audio-nerdery such as building dangerous amplifiers or modifying synths and I learned a little about the people who were working with sound professionally. I wanted to be one of them!

So, imagine my happiness when I came across this video editing company in need of an intern with an interest in sound. I stayed on and it became my very first job. One thing, as they say, led to another and I started to get returning clients.

I worked very hard to get better all the time and as the years went by I was invited to do short films, live broadcast, tv shows as well as music videos. I was incredibly lucky to get the opportunity to work for some very talented people which slowly started to lead to some vertigo-inducing projects. I somehow found myself doing sound design for people like Metallica, Roxette, Paul McCartney and Madonna and of course it was the stuff that dreams are made of for me.

I also got the chance to do feature films with theatrical mixes, big time international commercials as well as VR – but somehow I always felt there was more to learn, more experience to be gained and after almost four decades in the business, that feeling hasn’t changed. I’ve come to realise that this is one of the things that makes this job so exciting – there are always more things to learn and new stuff to try!

I remember doing sound design for a large beverage brand on a project which called for the voice of the devil at the end. The footage showed him as a slick, slender goth kind of person rather than a fire breathing monster and the clients were like: “Scare the living daylights out of us!”

I tried everything from crocodile breaths to vultures, vocoders, new plugins, old plugins, guitar amps, growls and whispers, roars and synths. We kept feeling it was on the right track, pretty scary but just not quite there yet. After a few sleepless nights of this I started to feel the pressure of having exhausted my options and as an almost last desperate kind of joke I just synced in a young woman’s voice, speaking really softly.

When I played it to the clients the next morning the effect was so completely unexpected and eerie that they almost fell off their seats.

In hindsight it wasn’t perhaps that intrinsically scary, the sheer shock played a large part at the time, but there and then it closed the job and the lesson learned from it all was that it was done in 20 minutes by recording the director’s assistant – easily outperforming days and nights of fiddling about with hardcore tech.

How did you get in touch with Pole?

I met Max at a business gathering and was fascinated by the way he talked about sound design for games. It became clear that not only was he a super nice guy, but he also packed some amazing skills in making vehicles come alive and pop out in interactive applications. Among many other things, I might add. A few years later we got the opportunity to team up for a high-profile project and I came to realize just how many fun things they had going on at Pole. I knew then that I had to find a way to work with these guys somehow – and I’m very happy to get the chance to be involved in some of their projects now. There’s so much talent in this place and it feels like I’m picking up new stuff every day so we can do great things together. 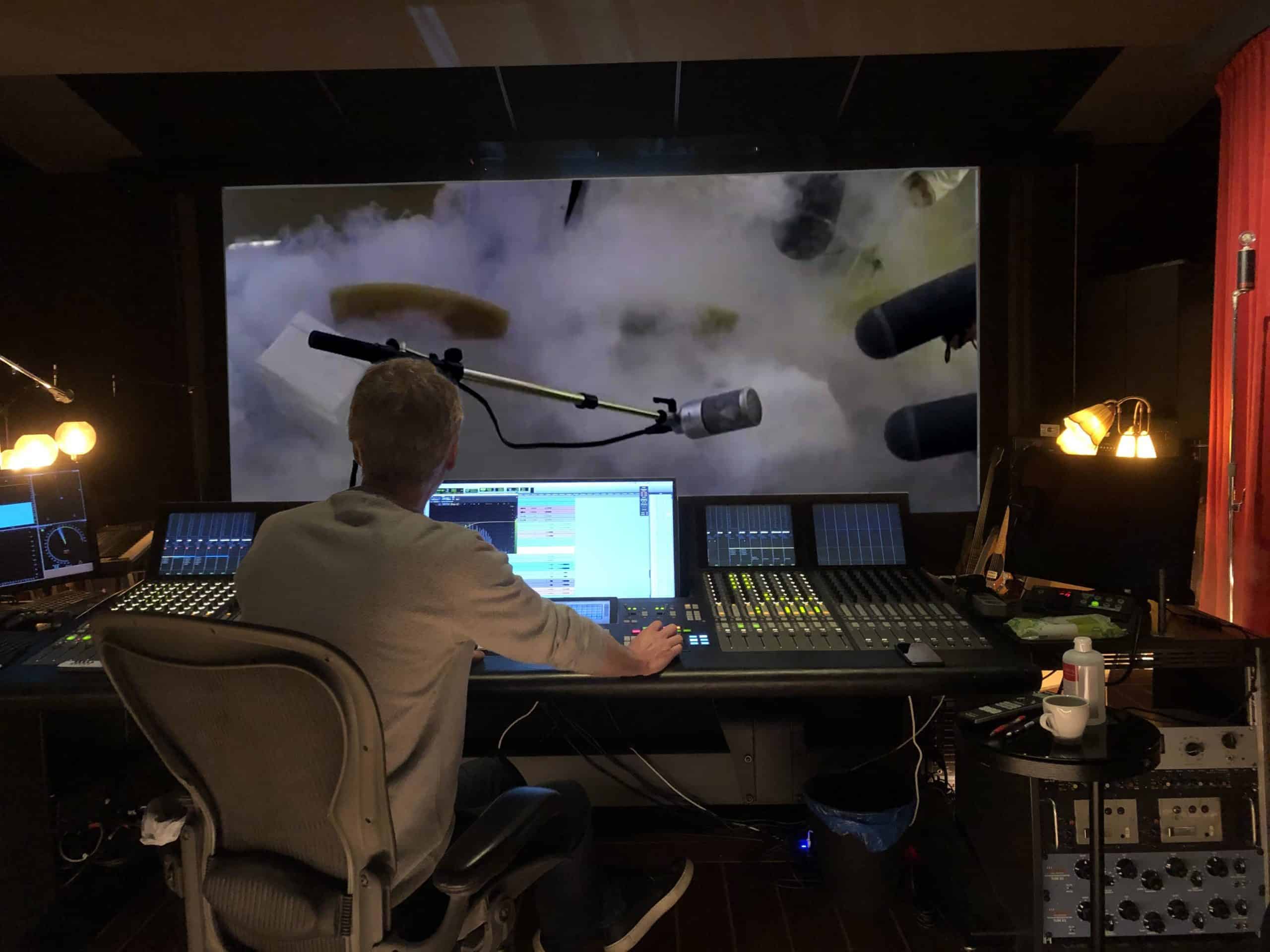 Eric mixing at Ljudbang in Stockholm

As a sound designer, what are you mainly involved in at Pole?

The thing about Pole is that the people are multi-skilled and share tasks between each other without skipping a beat, but I have been picking up some of the projects related to audio post production which is my home turf so to speak. Trailers, short films, cutscenes, things you watch like a movie from start to finish. As an audio post person, I step in where the field recordist left off and I combine all the sounds needed to tell the story in a compelling way. I clean up dialogue from unwanted noises, splicing different takes together to get the best performance. I also record foley, re-performing all sounds related to human movement including footsteps and of course I also have to come up with sounds for explosions, doors, birds and everything else needed to complete the soundscape.

The Pole libraries are an invaluable asset for fresh sounds and if there’s something really specific required there’s the huge advantage of having world class field recording competence under the same roof to capture the sounds we need. Be it a huge church organ, an old Russian tank or a tiny music box.

Sometimes the story calls for more otherworldly sound design which is one of my favorite parts. Creating sounds that that don’t exist in the real world with no holds barred. Spaceships, clouds of daggers, monsters or character transformations all present their own set of challenges and I love combining the digital power of systems like Reaktor with the analogue unpredictability of old modular synthesizers or transferring sounds to the granular realm to rebuild them in new shapes and forms. That’s when the Pole libraries shine in yet another way since they are recorded at 96 or even 192 kHz and can be pitched way down while still sounding bright and shiny.

Having grown up with large analogue mixing desks and tape recorders I feel very comfortable in the digital age. It has slowly become everything we wanted back then when we were compromising with channel counts and finite amount of outboard gear. Now I think the technology is becoming more and more transparent. It’s moving towards staying out of your way and lets you focus on being creative.

I like mixing in a large variety of formats, ranging from headphone stereo for web releases, or head tracked ambisonics for VR, all the way to full theatrical mixes in 5.1. We’re even stepping into Dolby Atmos both on the recording and mixing side and I think there’s a different set of skills required for each genre.

But all this said, I haven’t forgotten my fascination with sound design for games which sparked my interest in Pole in the first place, and now I have the opportunity to get involved in that some more.

Would you say there’s a difference between creating sounds for cinematics and games?

Well yeah, the main difference is of course that the sounds are moving parts in a game so they will be combined in ever changing ways depending on what the player does. Where a cinematic show involves pushing faders, a game involves adjusting parameters and writing code. You have to think in a different way to build those soundscapes but at the same time major game titles and feature films are approaching each other in many ways these days.

So that’s where I hope to be able to bring some of my experience and way of approaching soundscapes from the linear media world to the table, to see how we can build great sounds together.

How important is audio post production for the end result?

Unsurprisingly I firmly believe that every project will benefit from some audio post love. Not just the complex stuff mind you – even documentary pieces that are meant to sound unpolished will appeal to a wider audience if for instance the dialogue intelligibility is improved and various key elements are enhanced. Getting the dynamic flow in place is also important so that people don’t have to reach for the volume slider all the time when watching.

It’s not always an audio post pass will get noticed as something spectacular – sometimes it’s just quietly about removing the annoying stuff and making things sound like you’d expect as a viewer, which can be harder than it sounds to accomplish by the way.

You have worked as a sound designer pretty much your entire life. What advice would you give to somebody aspiring to become a skilled sound designer?

For me luck has played a big part when moving forward and I guess I’ve just tried to catch the opportunities as they’ve appeared and I’ve worked very hard to make the most of them.

I think it’s very helpful to have some kind of background in music when combining sounds, and it’s important to know the fundamental engineering stuff if you’re aiming for a professional career.

I mean you can absolutely do awesome things by just firing up your DAW of choice and start creating, but at some point you will have to know the ins and outs of gainstaging, sound propagation and how a compressor works under the hood to deliver what’s been required.

Schools are great of course but you can go a long way by just reading up, attending courses, webinars and asking people you trust. That’s how I did it by the way.

Working for Pole, what are you most excited about?

Getting into interactive sound design for games is something I’ve been looking forward to for a long time and it is indeed an artform in its own right. These guys do adaptive battle scenes, vampires or helicopter crashes with a true passion for sound. It’s so inspiring. And vehicles. Getting every nuance of that rare modified V8 or racing boat recorded down to disk, selecting the best parts and processing them to highlight the small but important details, and finally adapting, transforming it so it can be driven properly in the game – that all calls for some extraordinary craftsmanship.

As a true full-service company there’s also music of course. I like music! Orchestral scores, techno, metal or bluegrass, they do it all and there’s world class experience in mixing and production in house for that perfect shine.

Then throw short films, trailers and cutscenes into the mix where I can use my own experience and start to transfer it to some of the other areas – I mean who wouldn’t be excited?

To contact Eric, please send an email to eric@pole.se