GDC 2020 cancelled – but why were we going in the first place?

As most of you probably already know, the Game Developers Conference in San Francisco that was scheduled March 16-20, and is considered one of the highlights of the year in the gaming industry, has been temporarily cancelled due to the situation with the Corona virus. We, like many others, were in a stage of preparations, when one company after the other dropped out, and finally the event was called off. Here’s a short write up on why we keep going to GDC, and why we think you should too.

Max, in a few weeks’ time you and Linus were supposed to be off to the Game Developers Conference. You’ve been there quite a few times, right?

I think this should have been the third or fourth time we were going to the conference. First time must have been in 2015 or so, and it’s always a bit overwhelming the first time. Last year was somewhat special since we got to do a talk about Vehicle Recordings for Modern Games. Check it out in the GDC vault if you haven’t already.

Would you recommend people in the industry to go?

Going to GDC now and then is a good way to get faces to names, to check out what is the latest buzz in the industry and to meet with already established clients and friends. Some of the talks can be inspiring to attend as well.

Has any of your projects sprung from a meeting at GDC?

My experience is that GDC is all about networking. Projects can be discussed, but as often as they never happen when you come home, they can drop on your table a year later, or you get business from other network connections that you did not expect. So, I would not go there with a mind set to have projects to work on the day you get home, anyone familiar with the gaming industry knows the turns are much longer than this. But as an example, we once handed over a business card to a dude at the airport on our way home from GDC, and several years later he got in touch and hired us to do some work for his game.

What were your agenda this year?

We have as a goal to establish ourselves as one of the best game audio outsourcing companies around. It’s surprisingly many that still think of us as a sound effects company only, or even a vehicle sound effects company only, considering this is just one of the services we offer. Most part of our work is actually sound design, implementing and music for games, vehicle related or not. Since we also want to attract more cinematics and trailer work, we have teamed up with awarded sound designer Eric Thorsell who has a long experience from film, VR and commercials. Check out his latest work in the Unity tech demo, ”The Heretic”.

Since you’re kind of veterans of GDC, any tips for beginners?

It’s good to have a plan in advance before going there. Make a list and a time plan of the talks you want to attend, where and when you have meetings, and what parties to attend in the evenings. There is a lot going on, you will not be able to attend all of it. It could also be a good idea to have a look at what’s happening in San Francisco outside of GDC. One year we were lucky to catch a talk with Ben Burtt at the Exploratorium, where he together with Geeta Dayal talked about Bebe and Louis Barron, pioneers in doing electronic scores for sc-fi films in the 50s. Super cool!

And if you are an audio person, you cannot miss out on the late evening spontaneous meet ups at the Death Star, a sky bar at one of the fancy hotels downtown with a resemblance to Darth Vader’s hang abouts. Audio peeps also have a couple of meet ups during the week, the first evening meet up, the pizza dinner, the lunches in the park, and the audio pod breakfasts. 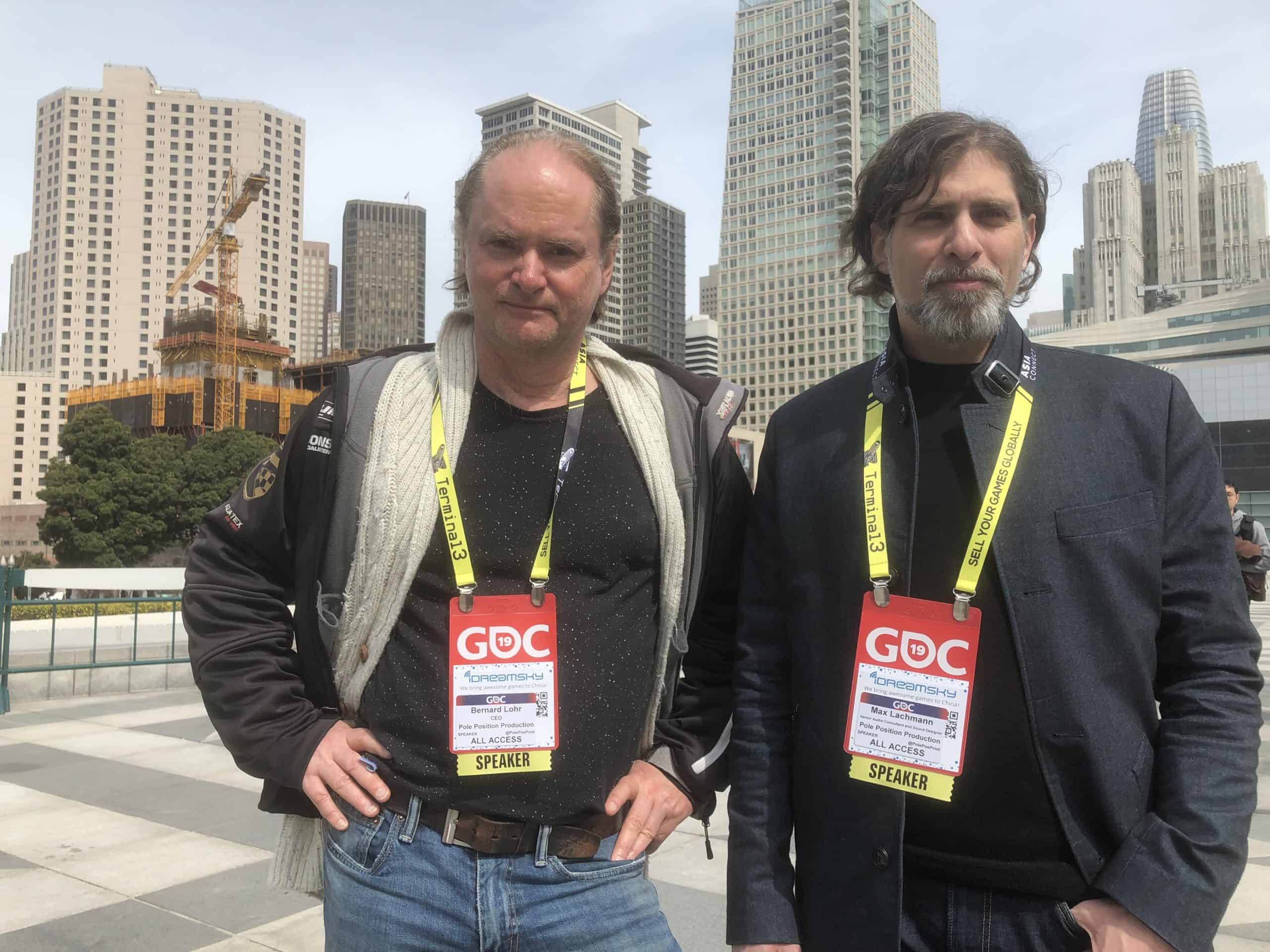 Bernard and Max at GDC in San Francisco in 2019.