“For the most part it is incredibly exhilarating” 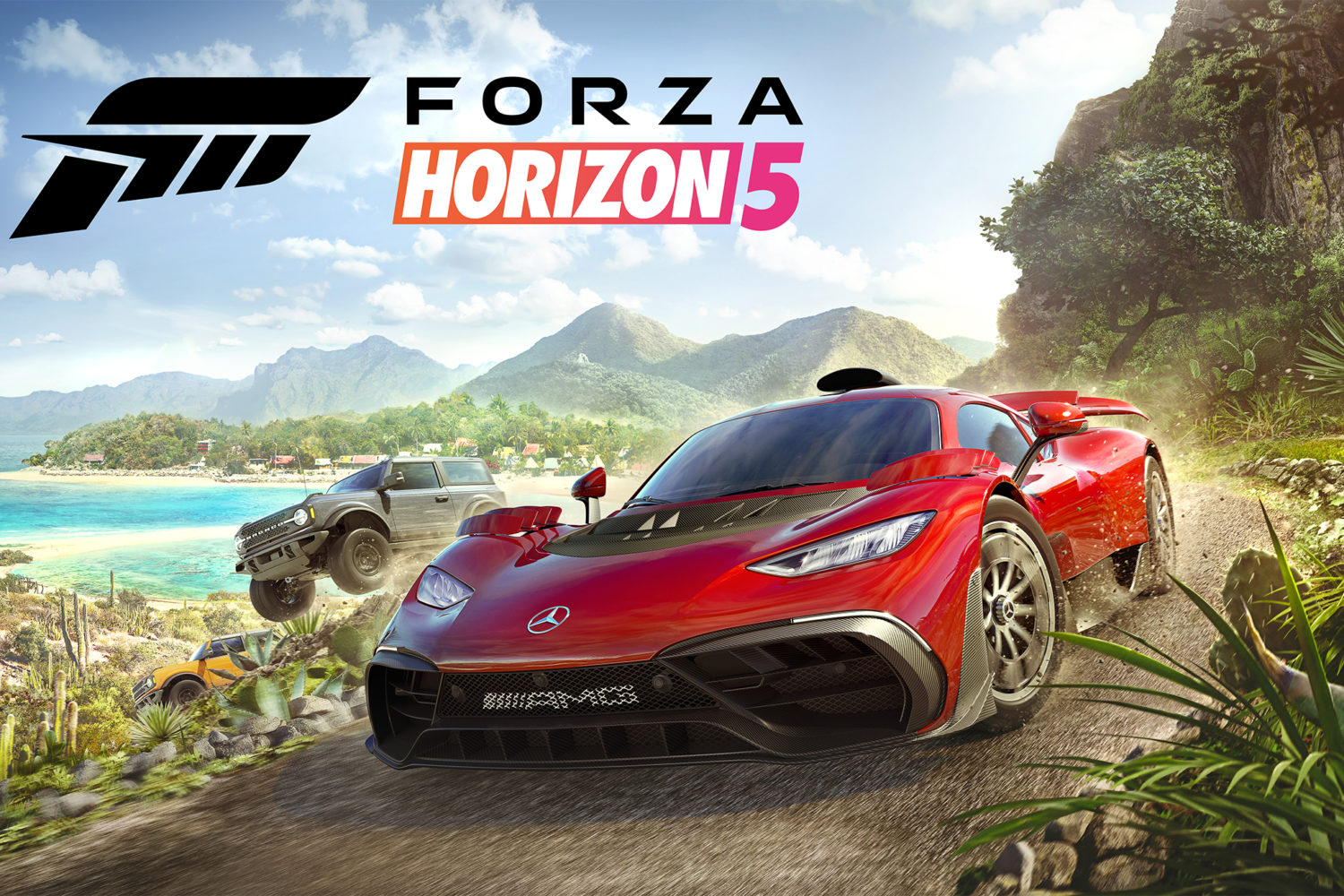 Forza Horizon 5 just hit the shelves. We had a chat with Fraser Strachan, Lead Audio Designer at Playground Games, about what it’s like releasing a massively anticipated game like that, what the biggest audio challenges were during production and want key aspects he looks for in a sound library.

So, tell us the story of Playground Games?

Playground Games was founded in 2010 with the vision to create genre defining video games for a global audience. “Forza Horizon”, Playground’s first title, began as a spin off from the highly acclaimed “Forza Motorsport” games with a twist that took the cars off the track and onto the open road. The series has grown and travelled to many exotic locations from Colorado to France and Italy, Australia, Britain, and now Mexico! Today, Playground has two studios in Leamington Spa, England. The first studio continues to support and grow the Horizon series and the second studio is now developing Fable.

And when did you join Playground Games?

Back in 2014, I made the move from audio post-production into game audio by joining Playground Games. At the time, Playground were working on Forza Horizon 2 and I was tasked with designing audio for cinematics and implementing voice-over. I’ve been with the company for around seven and a half years now, in which time I’ve had the pleasure of helping to evolve the audio soundscapes of these fun filled titles.

Just now you are releasing Forza Horizon 5. What’s it like releasing a highly anticipated game like that?

It’s very exciting and surreal to have grown with the franchise and see how the world has welcomed each of our titles. I didn’t quite realize when I started working on car games how passionate the community is about sound. For many, the first thing that people talk about when they mention a car is how it sounds, and I think that invites a certain amount of scrutiny that is unparalleled in other genres. For the most part it is incredibly exhilarating to work on a highly anticipated game, knowing that all the hard work and effort will be noticed. When you’re working on something creative, the ultimate payoff is having people share in the experience you have created and feel the emotions that you strive to make them feel in those moments. Knowing that there is an audience waiting to play what we are making forms a synergetic relationship and really helps drive the passion and enthusiasm on the development team.

The Forza Horizon series is one of the most appreciated video games series. What’s the secret behind its’ success?

I think positivity has a lot to do with it. We’ve always strived to ensure we maintain our core principles of fun, freedom, and beauty. Doing so has shaped quite a unique experience of wish fulfilment, where the player is living their best life and doing incredible things they might never be able to do in reality. Want to drive the Australian Golden Coast in a Lamborghini as fast as you can, go for it! Jump over a canyon in an old American classic, sure thing! Buy and live in a historical castle by the coast, why not?! I think Horizon is joyful escapism and that appeals to many people.

In the Forza Horizon 5 game you’ve used some libraries from the Pole catalogue. Had you worked with Pole before?

Pole Position Productions are a company that I have followed for a long time but had never directly had an opportunity to work with until now. I’ve been a big fan of their work and recordings for many games such as Mad Max, The Crew 2, and Need For Speed to name a few. Their influence on the industry is well known and the expertise they share in forums such as GDC talks have been very helpful to many aspiring sound designers. Their ethos and approach to car recordings is very similar to ours and I knew that by working with Pole Position, we’d receive great quality recordings that align with our own methods at playground Games.

What Pole libraries were used in this game?

Pole Position have an enormous catalogue of vehicle recordings to choose from and we worked closely with the team to identify what would best suit the needs of our latest project. I think we’ve now bought over 70 of the car recording libraries as well as a handful of alternative vehicles which have been very useful when creating the sounds of our Horizon Showcase races. Specifically, the Sea Doo library came in handy for one of our bespoke gameplay experiences! Working with Pole Position was a fantastic way to help us achieve our goal of audible upgrades for this project. We knew that we wanted to completely change the sound of every car in Forza Horizon 5, whether it was a remaster, or an original recording, or a library purchase. We also knew that we wanted players to be able to upgrade the sounds of their cars. With hundreds of cars to cover that was a lot of content so we knew that we’d need all the help that we could get! Max and the team were incredibly helpful, and the recordings speak for themselves through the positive feedback we’ve been seeing from the community.

What have been the biggest challenges with the audio in FH5?

The biggest audio challenge in Forza Horizon 5 was the complete overhaul of our entire car audio pipeline. We deleted every car event from Forza Horizon 4 and started again so that we could ensure absolute consistency. To accommodate this, we needed to drastically upgrade our granular engine tech, build an entire modular playback system, and then record or procure, process, master and implement each car within our development time. It was a huge logistical challenge. In addition to the cars, we also wanted to source and license hundreds of songs that fit the “Forza Horizon” vibe for the in-game radio stations. This always proves to be a huge undertaking that requires the help of many people. This was the first game where in addition to the radio stations we wanted to work with artists to compose new and never before heard music to match some of our new gameplay experiences. This is the first Horizon game to feature its own original soundtrack too and I think it lifts the game into a brand new and exciting space for gamers.

In what way does it differ from the previous versions?

Forza Horizon 5 features our most ambitious audio soundscape to date. We had an intentionally longer development cycle and used the time to really hone in on what next generation audio sounded like. Having completely rebuilt our car audio tech and pipelines, we took the opportunity to ensure that we could expand it outwards to the rest of the world. This is the first game in the series to feature fully granular audio on all the non-player cars in the world too.

Forza Horizon 5 was developed with scalability in mind so that every player on every platform can experience the same audio improvements but with slight changes to the level of detail. This was only possible by switching to our new modular engine system that can mix & match hundreds of sounds based on physics and platform data.

In addition to these improvements, we’ve implemented an entirely new chassis system, essentially a procedural foley system for our cars which helps ground them in the world with squeaks, clanks, and rumbles that match the car type.

We have also gone to great lengths to record the true sounds of Mexico, recreating the sound of our 11 biomes. From lush jungles to cities and over to the living desert, you’ll hear massive diversity in our wildlife and tropical birds. The sound of the entire world changes based on the season and time of day, creating a dynamic audio environment. Whilst we know that people love to drive at top speeds, our game is also about exploration, and we hope that people enjoy the detail that we’ve poured into every part of the soundscape.

Our brand-new acoustics system helps bring the world to life, by detecting walls and ceilings around the player we can playback accurate reflections based on the speed of sound and absorption coefficients of the surface materials. Environmental reverb systems are now using accurate convolution impulse responses and these are most noticeable by listening to the sounds of distant cars as you traverse the world. We’ve fed everything in the world through these impulses and they’ve really helped to create a cohesive soundscape.

Unlocking the power of the Xbox Series X and S consoles, we’ve also enabled Opus Compression for every sound in the game including our cars. This is the closest we have been to uncompressed audio and it really shows in the clarity of the mix. These are only a handful of the improvements that players can expect to hear in the game and I’m excited to see how players react to FH5 with all it’s new tech features and completely revamped audio design.

In general, when you go looking for a library for one of your games, what key aspects are you looking for?

Quality is the most important thing I look for in a sound library. Above all else, if a library is small but it has top quality recordings then I’d happily buy it. Secondly the recordings need to be organized and well named. When you purchase libraries for a fast-paced environment like games development, you really don’t have a lot of time to manually check libraries so you need to be able to drop them straight into your file structure and library software with ease. For everything else such as variation, perspectives, and microphone choice I’d expect those to be reflected in the cost of the pack. I’m aware that sometimes complex sessions aren’t always possible depending on the recording situation, but quality and organization are both signs of a good library to me.

Pole Position tick all the sound library boxes for me. Their libraries are always very high quality with plenty of variation for takes, perspectives, and microphones. Perhaps most importantly, it’s really easy to navigate their online shop and preview all of the recordings with samples from different microphones. When auditioning car recordings for example, it’s really important to know whether they contain certain types of takes and perspectives for our intended use. I’d happily recommend Pole Position and I can’t wait to see what they have in store for the future!

A big thank you to Fraser at Playground Games for doing this interview with us! Follow him at Twitter at @fraser_strachan.